A team of scientists from Old Dominion University, Kent State University and the University of Southern California has identified for the first time a clear 1,500-year cycle in the Arctic Oscillation (AO), the surface atmosphere pressure pattern in the far north that greatly influences weather in the Northern Hemisphere. Led by ODU geological oceanographer Dennis Darby, the team’s findings are featured this week on the prestigious journal Nature Geoscience’s website. Co-authors of the Nature Geoscience article, titled “1,500-Year Cycle in the Arctic Oscillation Identified in Holocene Arctic Sea-Ice Drift,” are Joseph Ortiz, a geological oceanographer from Kent State; Chester Grosch, a physical oceanographer and computer scientist from ODU; and Steven Lund, a geophysicist from USC. 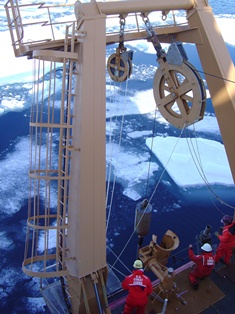 The researchers’ study, which was funded by the National Science Foundation (NSF), indicates that this natural cycle could be forcing some of the Arctic ice melting and unusual weather experienced recently in the heavily populated northern half of the globe. In a worst-case scenario that Darby described in an interview, the cyclical pressure pattern could combine with manmade climate change to exacerbate severe weather and flooding trends. In the near term, according to Darby, “The implications are that the severe winters of 2009-11 (experienced in northern Europe and elsewhere) might be tame compared to what is possible, based on past swings in the AO.”

Working on a 20-meter-long sediment core raised offshore of Alaska from 1,300 meters water depth, the researchers could detect varying amounts of iron-rich, sand grains ice-rafted from Russia over the last 8,000 years. The core was originally recovered from the flank of Barrow Canyon by an NSF-funded oceanographic cruise on which Lloyd Keigwin, Julie Brigham-Grette and Neil Driscoll were co-investigators.

Darby and his colleagues were able to show through geochemical analysis that some these Russian grains came from the Kara Sea, which is off the northern Russia landmass east of the northern tip of Finland. This is more than 3,000 miles from the core sample site, and the authors say Kara iron grains could have only arrived at the Alaskan coast by drifting in ice. Furthermore, the ice floes would only move from the Kara to offshore Alaska during a strong positive AO conditions.

Measurements taken by instruments in modern times clearly show relatively short-term fluctuations in the AO, with profound impacts on weather and climate. “But how the AO varies during the Holocene (roughly the last 12,000 years) is not well understood,” the authors write in Nature Geoscience.

Darby said that time-series analysis of the researchers’ geochemical record reveals a 1,500-year cycle that is similar to what other researchers have proposed in recent decades, based on scattered findings in paleoclimate records. But he and his colleagues are the first to find a high-resolution indicator of the Arctic record that resolves multidecadal-through-millennial-scale AO cycles, he said.

“Our record is the longest record to date to reconstruct the AO and documents that there is millennial scale variability in the AO,” Ortiz said. “The sedimentation rate at our site is also sufficient to statistically differentiate between a 1,000-year cycle and a 1,500-year cycle, which helps us to understand the dynamics of the response of the climate system to external forcing during the Holocene geological period.”

The 1,500-year cycle is distinct from a 1,000-year cycle found in a similarly analyzed record of total solar irradiance, the authors write, suggesting that the longer cycle arises from either internal oscillation of the climate system or as an indirect response to low-latitude solar forcing.

“The AO can remain in a rather strong negative or positive mode for many decades,” the research team writes in the Nature Geoscience article. “When it is positive as suggested by the upswing in the Kara series during the last 200 years, then the additional warmth due to the entrapped Arctic cold air masses during winters could exacerbate the mid-latitude signature of anthropogenic global warming resulting from increased atmospheric CO2. When the AO is strongly negative as seen in the winters of 2009-11, the Northern Hemisphere experiences prolonged intervals of colder than normal conditions. Because the maximum amplitudes of the AO as recorded in the Kara (iron) grain record in recent decades is less than a third of the amplitude in the past, the full range of variability in the AO is not likely recorded in the instrumental records of the last few decades.”

This leads Darby to his near-term forecast: “Thus the AO is potentially capable of much larger swings to positive or negative phases. If so, then these much stronger highs and lows should have greater impact on weather and climate, causing much colder Northern Hemisphere winters during a strong negative AO and milder winters during strong positive AO than seen in the last several hundred years. Such AO positive swings could add to anthropogenic warming causing even more rapid ice melt than has been seen in the last decade.”

Darby does his detective work by analyzing sediments, mostly from core samples that have been collected when researchers drill a hollow tube into the floor of the Arctic Ocean or nearby seas. The work is made possible by an iron-grain chemical fingerprinting technique he developed that enables him to determine the landmass where the grains originated. This provides evidence about winds and currents—and therefore the overall weather patterns—that brought the grain to its resting place. Even if natural cycles are responsible for some recent warming trends, this doesn’t let humans off the hook for polluting the atmosphere, Darby said. Human influence may combine with natural cycles to increase global warming.

Darby’s research is not directly involved in weighing human contributions to climate change, such as increases in carbon dioxide in the atmosphere brought on by combustion. “We’re looking for natural conditions that are helping to cause this global warming and sea level rise,” Darby said. “There seems to be a natural pacing to climate change. If you don’t know what changes are naturally occurring over the long haul, you don’t know how to deal with conditions over the short term.”

Photo 1:
Researchers and Coast Guard techs aboard the icebreaker USCGC Healy prepare to deploy a piston core near the location off the Alaskan coast where the core in this study was recovered.