Caverly will be at Kent State Trumbull for the first half of the Fall 2019 semester. Besides these workshops, he is directing “See No Beast, Hear No Beast, Speak No Beast,” a play loosely based upon Beauty and the Beast, with some major twists.  It's a story about the history of the battle between those who promoted sign language and those who promoted oralism (lipreading and speech) for the Deaf.

He has made it his mission to change the way theatre and screen portray Deaf individuals. When he sees Deaf characters in a play or movie, he feels like the script treats them as though “they’re the problem, they’re the issue in the story that needs to be fixed, and frankly I’m just not feeling that that’s the lens that the world needs to see.” 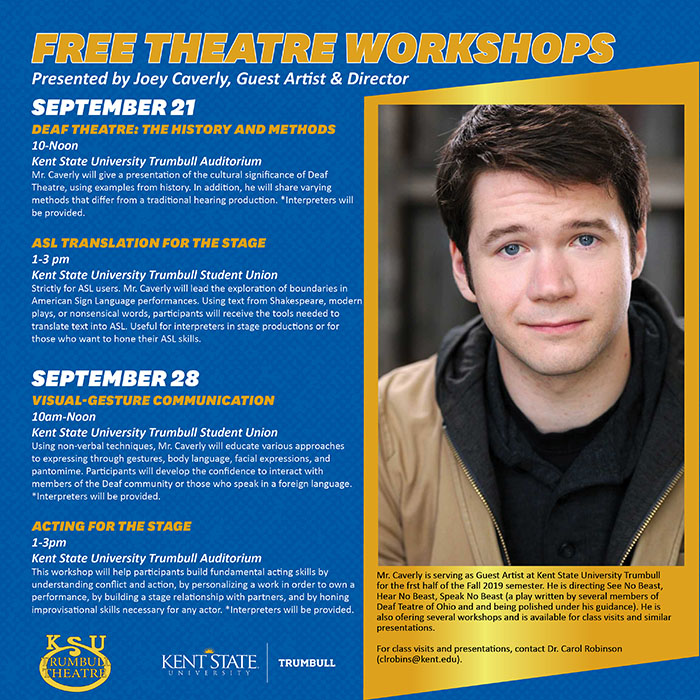 The workshops are open to the public. For more information, contact Dr. Carol Robinson (clrobins@kent.edu).

About the play, “See No Beast, Hear No Beast, Speak No Beast”

The story is very loosely based upon Beauty and the Beast, with some major twists.  It's actually a story about the history of the battle between those who promoted sign language and those who promoted oralism (lipreading and speech) for the deaf: in 1880, at the Second International Congress on Education for the Deaf, it was decided that sign languages would be banned, that deaf children would be forced to learn how to lip-read and speak.  The play includes characters from Beauty and the Beast, but also people from real life: Edward Minor Gallaudet and Alexander Graham Bell.  As with previous ASL/English productions done at Kent Trumbull Theatre, the cast and crew involve students and members of the community, deaf and hearing, signers and signing-impaired.  The performance will be done so that all who know either English or ASL can understand it.

About James “Joey” Caverly
Caverly graduated with B.A. in Theatre Arts from Gallaudet University in 2011 and has soon after joined National Theatre of the Deaf (NTD). He directed “The McWilliamses” and has performed in several plays, including “Journey of Identity” (playing the character Laurent Clerc) and “A Child's Christmas in Wales” (playing the character Dylan Thomas). Since then, he has directed several plays and performed both stage and screen. He directed William Shakespeare's “Romeo and Juliet” in both American Sign Language and spoken English for Community College of Baltimore County Community Theatre. He has also acted
performed lead character Billy for three different productions of Nina Raine's “Tribes” (SpeakEasy Stage Company, Studio Theatre, Berkeley Repertory Theatre) and was nominated for the Helen Hayes Award (one of the country's most prestigious cultural honors) for his Studio Theatre performances. In 2018, he was the understudy for the character Orin for the Studio 54 (Broadway) production of William Gibson's “Children of a Lesser God.” Most recently, he appeared in the Season 4 premiere episode of NBC's “Chicago Med” (9/27/2018). He also wrote a short play, “Civil Engagement,” that has been accepted for a 2019 production as a part of Deaf Spotlight's Short Play Festival (Seattle, Washington).