When Greg Schuster was a student at LaBrae Middle School in Leavittsburg, he never dreamed he would return a decade later and become an award-winning teacher and coach. In May, this would-be architect was honored with the 2019 Early Career Alumni Award during Kent State University Geauga Campus and Regional Academic Center annual commencement ceremonies.

In her letter to Schuster announcing this recognition, Kent State Geauga and Regional Academic Center Dean and Chief Administrative Officer Angela Spalsbury, Ph.D., said, “This award recognizes an alumnus who has demonstrated outstanding achievement in their chosen career or civic involvement — or both. You have been recognized as exemplifying the life-long learning role of a middle school educator through your perseverance in continually moving your education forward and by helping to host our middle childhood education students in your classroom at LaBrae Middle School.”

Schuster is simply grateful that he was hired as a permanent substitute for the second half of the year after graduating in the fall of 2014. He transitioned into his current position of seventh-grade science teacher during the next school year. It didn’t take long before he also became the head cross country coach; prep bowl (quiz bowl) advisor for sixth, seventh and eighth graders; and boys’ junior high track coach.

In his unassuming way, Schuster shares, “In my third year coaching cross country, our boys’ team made it past districts to regionals, and I had one boy make it to state. This has not happened at our school since 1991. Our program has grown every year since I have been coach, and I attribute this to making running in our practices fun.”

Also, in his second year as prep bowl advisor, LaBrae’s seventh/eighth-grade team came in first place, and the sixth-grade team placed fourth in the countywide tournament.

Schuster didn’t have to travel far and wide to discover his early potential. He stayed close to home and initially attended college at KSU’s Trumbull regional campus.

“The college experience of living in a dorm on a big campus never appealed to me,” he explains. “I knew that the Kent State regional campuses offered many of the same degrees and were much more affordable [than the Kent campus]. My parents lived 10 minutes from the Kent State Trumbull Campus, so that’s where I spent all of my freshman and some of my sophomore year. They didn’t offer the Middle Childhood Education Degree (MCED), so then I took the drive to the Geauga Campus in Burton. I was pleased to discover the small class sizes and one-on-one time with professors. It made it seem that each degree was individualized to meet each student’s needs.”

Schuster thrived in the MCED program, maintaining a 3.95 GPA while gaining rich experience and deep ties with his instructors and fellow students.

He credits the whole MCED staff, including professors Baca, Bowens and Dever, for encouraging him to achieve greater things. “Program Coordinator Dr. Robin Dever pushed me to be more creative and spontaneous as a teacher. Dr. Dever also provided us with opportunities like attending the OMLA (Ohio Middle Level Association) conference in Columbus. She would often give us feedback about various assessments and lessons that we would create.”

Schuster goes on to say, “The Kent State Geauga MCED is a tight group. It was not uncommon for alumni of the program to just show up during class to say ‘hi’ to the professors and share their experiences in the program and teaching. We have an annual Christmas party that the alumni and professors of MCED attend to catch up. Now, I'm the alum who’s going in to visit past professors.”

Although he felt well prepared for the classroom, today’s students continue to surprise him. “They are immersed in so much technology that a simple walk around the school grounds to pick up litter opens their eyes to the world around them,” Schuster says. ”Where I teach is considered the inner city, and many of our students never go outside.” This observation inspired Schuster to organize an annual seventh grade trip to Cleveland Metroparks’ North Chagrin Nature Center.

All in all, Schuster achieves excellence in the workplace because he loves working with young students. “The most rewarding aspect of teaching and coaching is seeing students surprise themselves with what they can do and seeing them succeed. Whether it's winning a prep bowl tournament, beating the school cross country record, to everyday victories like figuring out a lab in science or correctly solving a math equation, the surprised look of gratification always makes me smile.” 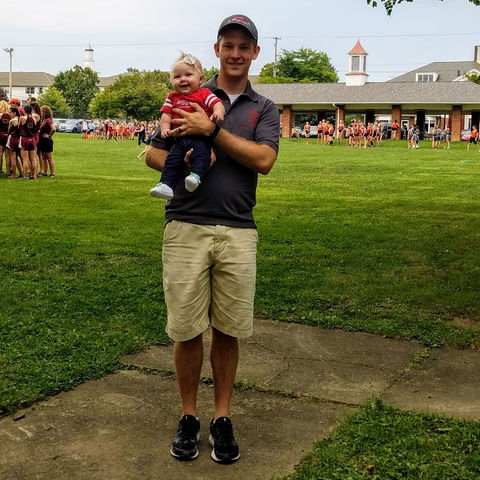