Competitive, multiplayer computer gaming is a favorite pastime for the average college student, both playing and watching. In fact, Forbes magazine reports that video games get more viewership from the 18-25 age demographic in the U.S. than the NBA Finals or the World Series.

Colleges and universities across the U.S. are starting to embrace the phenomenon through their extracurricular and varsity sports programs, including Kent State University and its regional campuses. Kent State Geauga and Twinsburg Academic Center Esports Club and Team Flashbang were established during spring 2019, offering students the option of joining as a club-level or varsity team player. The Esports Club operates at the Twinsburg Academic Center, spearheaded by Justin Cornelius, Financial Aid Coordinator; Dr. Judy Paternite, Program Coordinator for Information Technology; and Lance Williams, Operations & Special Projects Director. Williams and Cornelius presented at Ohio Higher Education Computing Council Conference (OHECC) and attended the UB Tech Conference to learn more about the life cycle of developing, implementing, and sustaining an Esports organization at the collegiate level.

Acknowledging his “huge passion for gaming” and his history as an early adopter of competitive gaming, Cornelius says, “My goal was to realize that competitive gaming has a place in higher education. There is a growing consensus that competitive gaming is a sport. I felt this was a great way for students to connect with peers in a different setting to help create a better network for soft skills, including teamwork, leadership, and communication; at the same time, create an extra-curricular activity that is current with growing trends.”

Despite long-held assumptions that computer gaming habits will drain students’ brains and pull their attention away from their studies, researchers say they provide an opportunity to learn skills such as critical and analytical thinking. Esports games require split-second decision-making and extensive strategizing. They also help to develop teamwork, communication skills, and hand-eye coordination, proven to help with concentration and multi-tasking abilities.

Cornelius says, “Studies also show students who play video games (in moderation) perform better academically than those who do not. High schools that have introduced Esports teams have found student GPA averages increase. The belief for this increase is that those students who didn’t have a club or sport to fit their need found like-minded students to connect with, and it seems to help the students grow.”

Dr. Paternite adds, “Esports is a sport just like football or basketball. It takes teamwork, practice, and commitment. There are several studies that show student involvement in a sport enhances academic performance.”

The Esports Club hosted a gaming tournament last spring with “League of Legends,” “Overwatch,” “Rocket League,” and “Smash Brothers” games. Prompted by students who wanted to ensure that Esports clubs were growing at Kent State's other regional campuses, a Competition Night was held for about 20 students from both campuses, creating interest in joining the club and enjoying the camaraderie built through gaming. The club holds a few competitions annually, minimally, once per semester. Future plans call for a competition-ready gaming lab to be established for hosting and competing. Outside of competition, the students meet about once a week to play, train and have fun.

As the program builds, awareness is on the rise through electronic signage, word of mouth, and social media. Cornelius adds, “We do try and occupy a public area so students who are walking between classes or across campus can see firsthand what to expect with our club. We want students to realize the inclusiveness of the club and that they, too, can be part of something amazing.”

Dr. Paternite says the Esports Club fills a void for students who need more opportunities to plug into campus life on a community level. “If students are involved in team and school activities, retention is better. Students feel connected to the campus and want to stay and complete their degrees.”

Cornelius agrees that young students are drawn to colleges that appeal to their interests through organized extracurricular activities. Once they identify with a group, that group becomes part of their academic support system. Since the Esports Club’s by-laws require students to meet required GPA standards and completion percentages, club members help each other to maintain those standards. 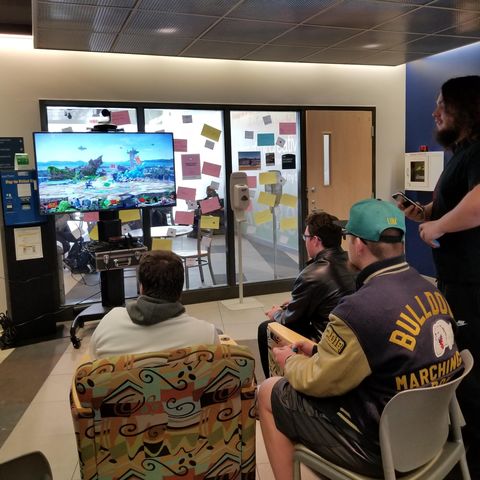