For the Love of Learning & the Greater Good

James O’Neil is a 2021 Kent State Geauga graduate with a bachelor’s of science degree in nursing (BSN). As a non-traditional student, he was a bit older than many of his classmates, juggling the responsibilities of adult life while going back to school. Despite all of these additional obligations, O’Neil excelled academically. Rather than patting himself on the back, he credits his Kent State Geauga instructors for propelling him to greater heights.

Among his accolades, O’Neil was elected to represent the Geauga Campus in a health care policy debate in 2019, he served as a nursing tutor, he was inducted into Sigma Theta Tau International (Delta Xi Chapter) he was recently honored by the Greater Cleveland Nurses Association (GCNA), and GCNA has even featured him in the July issue of Cleveland Magazine, with a celebratory gala to follow later this summer. 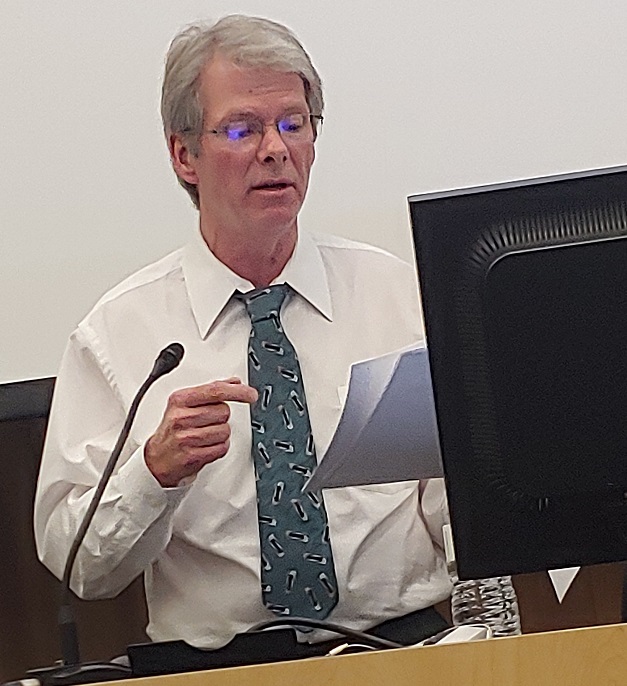 This high achiever has a simple explanation for his motivation: “I love to learn and I strive to excel at almost everything I do,” he says.

With contagious enthusiasm, he continues, “The human body is an amazing machine, made even more amazing through the teachings of the Kent State University instructors. Learning the material was not a chore. Rather, it was satisfying a thirst for knowledge.”

O’Neil didn’t overthink it when he was invited to participate in the health care policy debate. “My decision to apply was instantaneous. It didn’t matter which position I would be assigned (or volunteer for) because taking ‘the other side’ offers a chance to play devil's advocate, so to speak. It’s an opportunity to learn about and gain perspective for the views and positions of others. This enriches my knowledge and enhances my understanding.”

As a result of his strong showing at the health care policy debate and as a nursing student demonstrating excellence in scholarship, O’Neil was invited to become a member of Sigma Theta Tau International Honor Society of Nursing (Delta Xi Chapter), whose vision statement is “Connected, empowered nurse leaders transforming global healthcare.”

His insatiable appetite for knowledge prepared O’Neil to share that capacity with others. Since he was doing so well in his college courses, one of his professors recommended O’Neil as a peer tutor. He jumped at the chance to help his fellow students.

During its annual meeting in March, GCNA recognized O’Neil for his accomplishments. The professional nurses’ organization offers opportunities for information, education, involvement, and leadership development. In their annual effort to celebrate excellence in nursing, Cleveland Magazine and the GCNA will honor O’Neil at the 2021 Faces of Care Gala on August 21.

“The recent recognition by the Greater Cleveland Nurses Association was an honor,” O’Neil says.” As I mentioned the evening of the meeting, I truly do not believe anyone achieves anything worthy of recognition in a vacuum. It is not a solo effort. Melissa Owen and all the other instructors — of all courses, not just the nursing courses — were instrumental in my academic success.“

O’Neil also credits his wife for inspiring him to pursue nursing, leading by example. After high school, he served in the US Navy as a hospital corpsman, then engaged in various types of work prior to nursing.

“My wife and I both wanted to return to school for nursing,” he recalls. “Both of us were late bloomers, so to speak.”

“We had heard that the Kent State nursing program is highly respected. We live in Geauga County, so the choice of the campus was easy. My wife was accepted into Kent State Geauga's BSN program, graduating in 2013. She continued on with her education, earning an MSN with a Nurse Practitioner concentration at the Kent campus. Both of us took courses at the Trumbull campus too, and we had a few online courses connected with other Kent State campuses, as well. No matter the campus, the instructors are top-notch, excellent, knowledgeable, and dedicated to helping students succeed.”

As a recent graduate, O’Neil still must pass the NCLEX (the examination for the licensing of nurses in the United States, Canada, and Australia) before pursuing his nursing career, starting as a registered nurse. He is most interested in psychiatric, emergency department, oncology, or critical care nursing.

“But I am open to anything,” he says. “My ultimate goal is to return to school and earn a Master's of Science in Nursing with a Nurse Practitioner concentration. I aspire to participate in health/healthcare policy and I would also like to get involved in research. We love Geauga County and have no intention of moving elsewhere. “

As he moves forward from academics to practice, O’Neil says that he will carry with him the values of critical thinking, lifelong learning, and sense of belonging he enjoyed at Kent State Geauga. He looks forward to a rewarding nursing career, “helping others optimize their health and doing so as part of a team of caring professionals.“