Jeanne Marie Stumpf-Carome, MA, MS, Ph.D., is a world traveler, an anthropologist, and Kent State University Geauga Associate Professor with a high CQ. This CQ — Curiosity Quotient — drives Dr. Stumpf-Carome’s thirst for knowledge and understanding about cultures, customs, and crafts outside her everyday experience. It has also led to some of her souvenirs from a Panama Canal cruise to appear in an exhibit at the Cleveland Museum of Art (CMA).

Back in the mid-1980s, Dr. Stumpf-Carome took her first cruise, one along the Panama Canal, that made a stop in Panama’s San Blas Islands. The professor recalls, “Although the islanders were already used to tourism, it was not well-developed with a lot of shops. Walking through a village, I bought molas directly from the women along the way. Women were eager to sell them, fetching them from corrugated metal rooftops where they were drying and even selling me ones that they were wearing.”

Dr. Stumpf-Carome explains that molas are decorative panels that tell a story and are sewn onto the front and back of women’s blouses. “They are imaginative, creative, brightly colored ‘signs’ of current events and interests, e, g., political events, animals, human activities, and even boxing kangaroos,” she says. 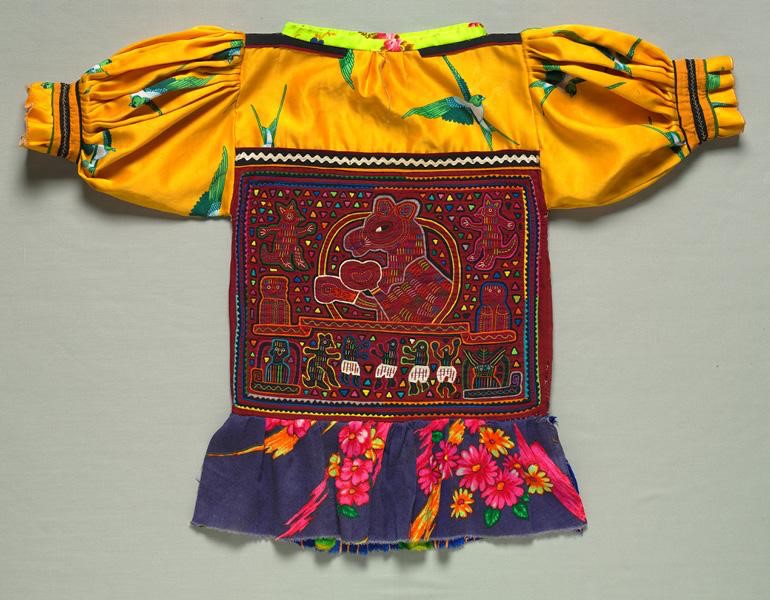 “In San Blas, the women were friendly, as they were selling their work and proud to show it. Sewing molas is a social activity for them. I was surprised at how willing they were to sell very elaborate molas, especially the ones on the blouses. You could tell the amount of work just by its detail.”

The anthropologist gave some of these molas away as gifts to friends and family and kept some for herself. Years later, in 2010, she donated part of her mola collection to the Cleveland Museum of Art, "little imaging that in August of this year they would be featured in an exhibit at the museum along with other examples of molas in the museum’s collection.”

Fashioning Identity: Mola Textiles of Panamá is the title of the exhibit that will be on display for a full year at the Cleveland Museum of Art, beginning November 22, 2020, in the Arlene M. and Arthur S. Holden Textile Gallery (Gallery 234).

According to the CMA’s web page on the upcoming exhibit, “The mola is a key component of traditional dress among the indigenous Guna (formerly Kuna) women of Panamá. Guna women have been sewing mola blouses since the turn of the 20th century, and they have become powerful symbols of their culture and identity. During the Guna Revolution of 1925, Guna people rallied around their right to make and wear molas as a statement of their independence. They ultimately gained sovereignty over their territory, an archipelago of hundreds of small islands along Panamá’s Atlantic coast, known collectively as Guna Yala.”

The museum website further explains, “Molas are masterfully hand-sewn cotton panels that are made in pairs and sewn into blouses. They feature a wide array of vibrantly colored compositions, with designs ranging from geometric abstraction to imaginative scenes inspired by popular Western culture. Strong expressions of duality, repetition, and equilibrium are evident in mola imagery, both in single panels and those comprising the front and back of a blouse. Driven by precise aesthetic values and a spirited practice of artistic critique, Guna women are passionate about making ever more innovative mola designs that continue to push the boundaries of their cultural tradition.”

This free exhibition will display both individual mola panels and complete mola blouses from CMA collections of the Cleveland Museum of Art (including four molas donated by Dr. Stumpf-Carome) and Denison University in Granville, Ohio. The molas on display will span Guna history from the era of the 1925 revolution to the 1980s.

This exhibit relates to the anthropology and sociology courses Dr. Stumpf-Carome teaches at Kent State Geauga, “as it is highlighting the relationships that an indigenous people have to each other as expressions of their own and the community's identity, i.e., a different kind of tattoo,” she says.

It also speaks to the relationship she has developed with the CMA over the years. Dr. Stumpf-Carome was awarded the Connie Towson Ford Teaching Fellowship from the Cleveland Museum of Art in 2018-2019. In this capacity, she brought art collections from the hallowed halls of the museum into the classroom as part of CMA’s interactive Art to Go program, providing students with unparalleled experiential learning opportunities. Her lessons in cultural anthropology, archeology, sociology, and human evolution came alive through hands-on learning explorations with cultural artifacts from CMA collections.

Ten years ago, when the professor’s molas were donated to CMA, the museum initially used them in the education department to teach children about customs and clothing from other cultures. Since then, the status of the molas has been elevated. They are now a part of the museum’s permanent collection, valued for their distinguished quality, rarity, and historical significance.

Dr. Stumpf-Carome is a curious lifelong learner who appreciates the cultures and craftsmanship of other people around the world. She never realized her travel souvenirs would lead her to become a donor of valuable works of art that would later become part of the prized permanent collections or upcoming exhibits at the esteemed Cleveland Museum of Art. It’s the type of story that could be depicted on a colorful mola.