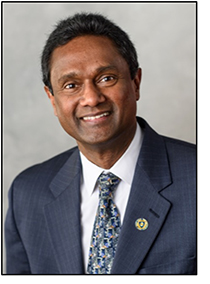 “Dr. Kasturiarachi is a well-respected researcher and educator,” says Denise A. Seachrist, Ph.D., interim dean and chief administrative officer of Kent State Stark. “His strong administrative talents make him the ideal person for this position.”

Kasturiarachi began teaching mathematics on the Stark Campus in 1995. Currently ranked as an associate professor of mathematics, he has taught courses in calculus, linear algebra, matrix theory, statistics, probability theory, complex variables and mathematical analysis. Prior to teaching at Kent State Stark, he spent a year as an assistant professor and director of the Academic Mastery Program at Occidental College in Los Angeles. Kasturiarachi held a post-doctoral research position at Duke University in North Carolina from 1993-94. From 1987-93, he held a position as a graduate teaching assistant at the University of North Carolina at Chapel Hill. While at UNC-CH, he was the recipient of a research award by SIAM-South East Atlantic Section and received the J. Burton Linker Award from the Department of Mathematics in recognition for excellence in teaching.

Kasturiarachi earned a bachelor’s of science degree with honors in pure and applied mathematics from the University of Peradeniya in Sri Lanka. In 1993, he earned his doctoral degree in mathematics from the University of North Carolina at Chapel Hill. He has published papers on non-linear wave theory (both integrable and non-integrable systems) and leap-frogging Newton’s Method, as well as numerous publications in mathematics education.

“It is with great pleasure and enthusiasm that I take on the position of assistant dean for academic affairs at Kent State University at Stark. The experiences I have gained as an administrator have shaped my thinking and expanded my insight, allowing me to focus on the student-centered nature of higher education,” says Kasturiarachi. “I am excited to assume a leadership role at Stark County’s public university, collaborating my experience and vision with the highly talented faculty and dynamic staff of this wonderful institution.”

Kasturiarachi’s leadership will be highly utilized during this progressive time at Kent State Stark. The Sciences Building, a 41,140 sq. ft. structure, part of a $17 million renovation which includes 5,250 sq. ft. of remodeled lab space in Main Hall’s East Wing, opens in fall 2015. The building will address the area’s growing educational needs in fields, such as geology, chemistry, biology, nursing and physics.

He resides in North Canton with his wife, Sharon (Buckeye Health Plan), and daughters, Brittany, a doctoral student in Ohio University’s Osteopathic Medicine program; Naomi, a University of Pittsburgh student; and Courtney, a student at North Canton Hoover High School.