Looking out over the Grand Canyon into the vast, wide-open space, Demi Edwards felt at peace. The gorge that could humble any soul with its breathtaking expanse, wrapped her in comfort, making big problems seem small and solutions within reach.

During a time of transition for her family, Edwards visited the national park. The 18-year-old found herself facing huge decisions.

Growing up in a military family, she was used to relocating. She was born in Hawaii, but a move from Wisconsin to Canton just before her senior year in high school took some adjusting.

“I knew it was time to let go and see where life would take me,” explained Edwards.

Purpose was waiting in her own backyard. Up the road from her grandmother’s longtime Jackson Township home, Kent State University at Stark was her option until she figured out what was next.

“I’m not going to lie. I fell in love with Kent State Stark the minute I stepped onto campus. This university became ‘my next,’ ” said the history major and Honors Program scholar. 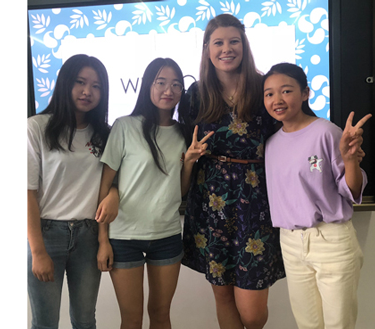 A constant source of support, Edwards’ mother, Barb, encouraged her daughter to get involved. And, she did. Edwards became known as the student “who is everywhere” – leading campus tours as a Student Ambassador, helping peers as a Peer Advocate and rallying fellow academic minds as president of the History Club.

“There’s so much to take advantage of at Kent State Stark,” she said.

Edwards was among a group of students who traveled over spring break to Xi’an, China, with Leslie Heaphy, Ph.D., associate professor of history and Honors Program coordinator. The trip opened doors for the graduating senior.

Today, the girl who once was unsure of her next step has lined up her future. It begins with a newly acquired full-time position teaching English at Xi’an International Studies University in China, one of Kent State Stark’s partner schools in its growing English Immersion program.

The 22-year-old expects the metamorphosis to continue as she plans to attend law school after her year abroad in China, armed with international experience and her Kent State University degree.

The future is wide open, and Edwards is ready for her next adventure.