Bringing the World to Stark County 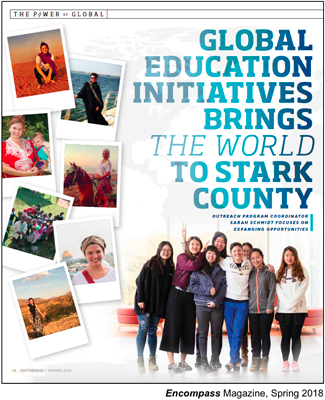 A long way from rural Mansfield, Ohio, the girl who grew up with cows in her backyard was now half way around the world learning Swahili and teaching children how to speak English. She was 20, and crossed the Atlantic for the first time.

“It truly was life changing,” said Schmidt, who spent half a year near Nairobi’s Great Rift Valley, part of an intra-continental ridge system that runs through Kenya from north to south.

“After that trip, I knew I wanted my career to be in the international arena.”

Nine years later, Schmidt has landed as the outreach program coordinator for the Office of Global Education Initiatives at Kent State University at Stark. The office is responsible for advising international students and scholars, helping students interested in study abroad, and overseeing all education abroad initiatives and international partnerships at Kent State Stark.

As a liaison of the Office of Global Education at the Kent Campus, the Stark program connects domestic and international students with excellent services and support.

Schmidt began her work in Kent State Stark’s position, newly created in 2015, after earning a master’s degree in Ethics, Peace and Global Affairs from American University in Washington, D.C. While in the nation’s capital, Schmidt served as American University’s program coordinator of the Mohammed Said Farsi Chair of Islamic Peace.

Over the past few years, she has played a pivotal role at the Stark Campus, which has experienced tremendous  growth in the English as a Second Language (ESL) program. The initiative began with 11 Chinese students, increasing to 27 and then to 34 students studying at Kent State Stark last fall.

“It is cool to look back at three years ago when the office was established and think about all that we’ve done since then,” Schmidt said. “It’s pretty awesome, actually.”

There’s not only power in numbers, but in a collective, reciprocal experience.

“What I love about our program is that it provides students with opportunities to travel, but for students who do not go abroad, we are bringing the world to our campuses through our programs,” Schmidt explained.

"Having that cultural and exchange component is crucial. We shouldn’t be hearing from one voice in an international program, we should be hearing from each other. Anything we can do to foster understanding and empathy is a good thing. The more we can dispel stereotypes, the better."

And Schmidt knows a thing or two about overcoming obstacles. Her flight anxiety hasn’t stopped her from traveling to 40 different countries. Her limited understanding of Arabic didn’t keep her from going to Morocco on a whim. It was one of her most memorable trips yet.

“Since I was a child, there’s always just been something inside me that was drawing me away – in a good way,” she said. “Not turning my back on my roots, but taking them with me.

"Coming home, I’m changed. We all are when we see the beauty there is in the world.” 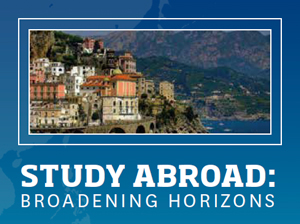 Short-term study abroad trips are the most popular for students at Kent State University at Stark. The Florence Summer Institute in Florence, Italy, tops the list for many students. In 2016, 40 students went to Florence; last summer, 95 students made the trek. Switzerland and Japan are other top destinations.

Faculty-led trips are a growing trend. Leslie Heaphy, Ph.D., associate professor of history, has included a study abroad component in her History and Public Space course this spring. The class will travel to Xi’an, China, during Spring Recess.

“I believe students learn so much more about the world and themselves by visiting other cultures and appreciating how diﬀerent people see the world and experience all it has to teach us,” Heaphy said.

“There’s a whole litany of things students gain from study abroad,” Gasper-Hulvat said. “It changes your perspective on life and the world. They are coming for the art, but the travel-related experiences they have in addition will have an equally profound impact.”