This story was published in The Repository on Wednesday, Nov. 24, 2021. Written by Sam Zern. 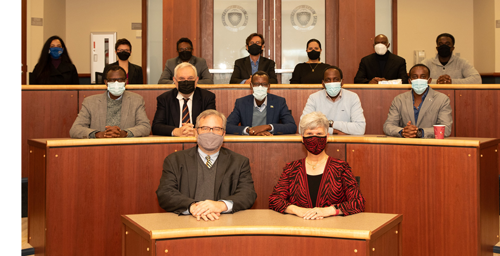 Kent State University and the University of Rwanda have a new partnership that administrators say is connecting students, faculty and research across oceans.

Leaders from the University of Rwanda spent last week in Northeast Ohio for a series of in-person meetings with leaders from Kent State's Stark campus to finalize details on a new partnership that will eventually bring joint classes, international exchanges and research across multiple disciplines.

"This is envisioned to become a very deep partnership with lots of different layers to it," said Sarah Schmidt, assistant director of Global Education Initiatives at Kent State University at Stark.

"We have the institutional level, and we have formalized the partnership with University of Rwanda, but there will be various collaborations within that partnership so curricular innovations and collaborations, potentially even joint degree programs at a certain point."

The schools will offer studies in undergraduate and graduate areas, particularly in aerospace engineering, education and conflict management.

The University of Rwanda will begin receiving study abroad students from Kent State this summer, and the universities plan to have a joint research conference in 2023, focusing on conflict management.

As early as the spring semester, Schmidt is looking to teach a joint course in peace education alongside a professor at the University of Rwanda, with students from both universities learning together in a virtual classroom.

Both universities have their own schools examining peace and conflict: Kent State's was created following the 1970 Ohio National Guard shootings of Kent students protesting the Vietnam War, while the University of Rwanda's evolved in the aftermath of the 1994 genocide and civil war in the country.

Those shared tragedies have given both schools a mission toward understanding conflict and peace.

"The two centers are willing to cooperate so to cross-fertilize each other and share experiences, work together, research approaches and methodology to prevent conflicts in our respective communities," said Alexandre Lyambabaje, vice chancellor of the University of Rwanda.

Lyambabaje said the partnership has been in the works since 2018. Even though the pandemic made some of the international travel between the schools difficult, the resulting program speaks to the willingness from both schools to partner and cooperate on their shared values, he said.

Pacifique Niyonzima, a graduate assistant at Kent State University who is from Kigali, Rwanda, has been pushing the two schools to work together since he interned with the University of Rwanda in 2018. He and Schmidt took a group of Kent State students to Rwanda during spring break in 2019 for a class on conflict management and to further the relationship between the schools.

"I've been focused on higher education and internationalization, so I'm so very happy to see that this initiative is coming together," Niyonzima said. "Now the rest is implementing actions."

Part of the benefit of the partnership, administrators say, is the chance for cross cultural experiences.

When the Kent State team traveled to Rwanda, they toured museums and visited a safari. For the University of Rwanda team, that meant visiting Canton’s Pro Football Hall of Fame.

"Dean [Denise] Seachrist called me and said that she was looking for something uniquely American, and I think we managed to find something that is uniquely American," said Rich Desrosiers, chief communications officer at the Pro Football Hall of Fame.

"Even though many of the particulars about American football were new and unusual to the guests, I still think they managed to capture something that's important to us at the Hall of Fame, which is that the game of football is more than the sport itself, it's about the camaraderie that's built, the team aspect of the game."