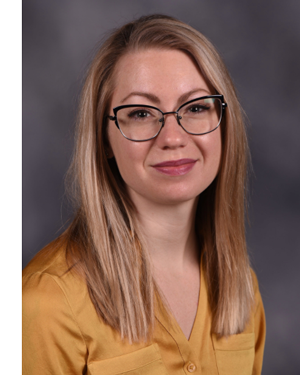 Jessica Conrad, Ph.D., a lecturer of English at Kent State University at Stark, has received a Fulbright U.S. Scholar Program award to Austria.

The U.S. Department of State and the J. William Fulbright Foreign Scholarship Board announced that Conrad will lecture and research at the University of Graz as part of her project, “Perspectives of American Protest Literature and Culture from Abroad.”

Conrad’s project traces connections between historical examples of early American literary activism to current cultural expressions of protest, particularly in social justice and climate activism. While teachings and scholarship often focus on nonviolent action, such as sit-ins and marches, less attention has been paid to how literature and the arts may have been – and continue to be – used to get the word out, inspire new thinking and call for change.

Conrad will work alongside social and environmental justice scholars in the Graz American Studies department to teach courses, lead doctoral colloquia and collaborate on publications.

“This project flows from Dr. Conrad’s doctoral research, her ongoing research and her excellent teaching of American literature at Kent State University at Stark,” said Robert D. Sturr, Ph.D., assistant dean of academic affairs at Kent State Stark. “She will focus on the role of literature and the arts in social change movements, a subject as relevant today as it was during the 19th century period of American cultural history that Jessica studies.”

As a Fulbright Scholar, Conrad will share knowledge and foster meaningful connections across communities in the United States and Austria. Fulbright Scholars engage in cutting-edge research and expand their professional networks, often continuing research collaborations started abroad and laying the groundwork for forging future partnerships between institutions.

“We look forward to what she will share with colleagues and students upon her return,” said Sturr, adding that Conrad’s award is a tremendous honor for all at Kent State Stark.

The Fulbright Program is the flagship international educational exchange program sponsored by the U.S. government. It is designed to forge lasting connections between the United States and other countries, counter misunderstandings, and help people and nations work together toward common goals.

Since its establishment in 1946, the Fulbright Program has enabled more than 390,000 dedicated and accomplished students, scholars, artists, teachers and professionals of all backgrounds to study, teach and conduct research, exchange ideas and find solutions to shared international concerns.