Live Chat
Dr. Deepraj Mukherjee challenges his students to find the answer that will better their homes, neighborhoods and communities.

From Kolkata to Canton: Deepraj Mukherjee propels Kent State to the World Stage 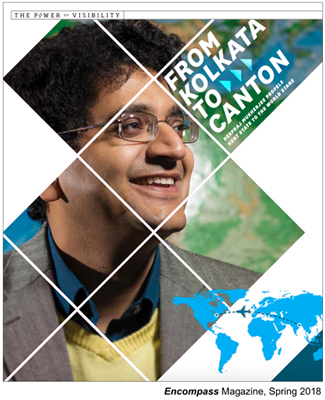 Deepraj Mukherjee grew up in a middle-income family in Kolkata, India, but when he walked the city’s streets poverty  was unavoidable. Hunger knew no divide, afflicting families and neighborhoods in this capital of West Bengal where more than 15 million hail from every income level.

A young Mukherjee asked that question more than once. He wrestled with it. “Even from childhood, I always had the question in my mind: why poverty? What can we do to eradicate poverty?”

As a teenager, Mukherjee studied works by the Indian expert on welfare, Dr. Amartya Sen, who was awarded the 1998 Nobel Prize in Economic Sciences.

“I read it somehow and thought about how economic contributions can help eradicate poverty,” said Mukherjee, Ph.D., associate professor of economics at Kent State University at Stark. “I read it and thought, how can I do this? How can I help?”

In Mukherjee’s office on the third floor of Main Hall, he points to a photo capturing the moment he received his doctorate from the University of Memphis in 2010. It was the moment his dream became reality.

“I came to the U.S. to study economics. This country has the best universities, the best research facilities in the world,” he said.

Today, Mukherjee challenges his students to find the answer that will better their homes, neighborhoods and communities. He encourages them to think about how economics influences everyday life.

Since Mukherjee joined the faculty at Kent State Stark in 2012, he has been impressed with the educational quality and research opportunities available to students.

“The fact that undergraduate students can be exposed to high-quality research gives them the perfect way to obtain the highest quality education,” he said, “because, at the end of the day, it really is that experience you are getting in the field.”

Mukherjee takes that personally. In fact, it’s his No. 1 goal: to make  an impact on his students. That’s why he treasures a note he received from graduating senior, Patrick Martell, last year.

“The many opportunities and projects completed with your guidance truly made my college experience the best it could have been,” Martell wrote. “It was a lot of fun learning about economics and its relationship to everyday occurrences in both business and daily life.”

Mukherjee is happy to be a part of the Kent State University system and help propel the Stark Campus to the world stage.

“Our regional campus can only grow if we are giving back to the community – that’s the economic impact,” he said.

By having a global brand image, it allows Kent State Stark to serve much better locally as well, said Mukherjee, who was recently elected editor-in-chief of the International Journal of Business & Economic Development. Published in London, the scholarly and refereed journal’s membership is global – from Italy to Russia, Indonesia to Australia, and numerous countries in between.

“When we receive international exposure, that visibility also belongs to the campus, to the university,” he added, “because this is Kent State University and that gets promulgated all around.”

And, it’s full circle. Mukherjee never forgets his childhood in Kolkata, prodding him to give back, to make a difference.

“Deepraj is innovative and a good campus citizen. He meets the needs of his students and always seeks solutions fueled by the power of Kent State,” said Denise Seachrist, Ph.D., dean of Kent State Stark. “He wants to go out and change the world, and isn’t that what it’s all about?”