Live Chat
"Kent State is not about a specific location or four walls. It's access to an education that extends beyond place." - Brandon Davis

This is My Kent State 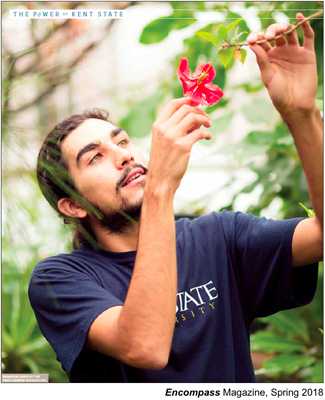 Come summertime, Brandon Davis could often be found gardening with his grandmother at her Canton Township home. He learned when to harvest vegetables and how to select flowers that bloom best in full sunlight.

After graduating from Canton South High School in 2011, he went away to college but found his best fit less than 20 miles down the road. Davis cultivated his passion for plants when he discovered purpose at Kent State University at Stark.

He’s one of the 5,000 students who have found a home at the Stark Campus and one of nearly 1,900 Kent Campus baccalaureate students who took courses at both Stark and Kent campuses in 2017. “There are so many options and opportunities that fit my personal schedule and timeline,” said Davis, who commuted four days a week to the Kent Campus last fall. Davis credits Matthew Lehnert, Ph.D., associate professor of biological sciences, with fostering his interest in science, developing the 24-year-old’s course of study in botany and chemistry.

“I took Brandon on as a research student because he demonstrated the skills I seek in research students: enthusiasm for science, the ability to grasp scientific concepts, and the aptitude to be an independent and reliable researcher,” Lehnert said.

On a sunny Tuesday in November, Davis was tucked away in the lab on the first floor of the Science and Nursing building. There, he discussed discoveries made at Argonne National Laboratory in Chicago as part of Lehnert and his team’s groundbreaking research on the feeding habits of insects. Later that afternoon, Davis would be at the greenhouse behind Kent’s Cunningham Hall.

“I’m really happy I didn’t limit myself,” Davis said. “Kent State is not about a specific location or four walls. It’s access to an education that extends beyond place.”

“Kent State is a large research university that impacts communities across Ohio and beyond.  I always like to start by noting our scope – from the tip of Ohio in Ashtabula down to the Ohio River,” said Ritchey. “And, that’s not to mention our growing presence overseas.”

As one of the largest regional systems in the nation, a wide array of programs is offered –  ranging from computer technology and nursing to the arts and humanities.

“Think of the magnitude of Kent State in the sense that it has huge capacity to help each and every community we are in,” Ritchey said. “We have magnificent, research-capable faculty possessing cutting-edge knowledge throughout the state.”

Engaging communities where campuses are located to foster partnerships and economic development is a primary goal of Kent State. Another goal: ensuring curricular integration across all campuses to guarantee a common foundation for all students as they proceed with their academic programs.

Multiple degree tracks are created with the intent that students begin coursework at Regional Campuses, signifying the caliber of faculty and staff at those campuses. “This is the value of the team,” Ritchey said. “We offer the foundation for you to move on and be successful.”

Twenty bachelor’s degrees can be completed entirely at Kent State Stark, which leads the way among the Regional Campuses – each filling a niche for specific academic programming in their communities. Students also can choose to begin coursework toward any of Kent State’s more than 282 undergraduate degree programs.

Graduate student Natalie Lucas is pursuing her master’s degree in accounting at the Kent Campus, following the successful completion of her bachelor’s degree. Lucas, of Jackson Township, began her coursework at the Stark Campus.

“Both campuses have been an integral part of my college career,” said Lucas. “I feel very connected here and there’s a real sense the faculty and staff really want to see students succeed and do well.” Lucas is a graduate assistant and says she doesn’t mind the 45-minute commute. Also a tutor at Kent State Stark, she’s happy to pass along knowledge – and advice – to students when they ask for it, including her younger brother, Ryan, who is a Stark Campus student.

Small class sizes, affordable tuition and one-on-one advising are just a few reasons why Lucas and more than 12,000 students like her attend Kent State’s Regional Campuses.

“I’ll graduate debt-free as a result of my time at Kent State Stark,” she said. “I’ve always enjoyed math, and now I get to help people in their decision making.”

Lucas, 22, already has secured a full-time position at a local accounting firm. She graduates in May.

Patrick Dillon, Ph.D., assistant professor of communication studies, teaches courses in the applied communication concentration at both Stark and Kent campuses. “One of the misnomers for regional campuses is that students are not as qualified or competent as students at a main campus. But we avoid even calling the Kent Campus the ‘main campus’ because that fits a model that is not true for our students,” said Dillon.

Students – regardless of campus – turned in  consistent, high-quality work in Dillon’s fall classes. “Both sections did a fantastic job demonstrating the best communication skills that you would hope to see from communication students,” he said.

“This brings home the point that we are one Kent State with various locations.”

In this way, the Regional Campuses are a mirror, reflecting a cohesive Kent State. Over the last five academic years, between 25 and 34 percent of all Kent Campus bachelor’s degree graduates have taken at least one course at Stark and 7 to 8 percent of all graduates take at least half of their coursework at the Stark Campus, according to Mary Southards, assistant dean for enrollment management.

“When we meet with students, our philosophy  is to talk to them about what they can accomplish in the Kent State system,” Southards explained. “We talk about all that Kent State University has to offer, and we talk about how you can begin your college career here with an emphasis on the ease of transition from our campus to the Kent Campus.

“We also discuss how we are an integrated system and it is not unusual to see students at multiple campuses. To me, that says the system is working,” she added. “If I’m juggling school, work and family, I’ll need to take my classes closest to those things, and that’s what a regional system should facilitate. How we work within that system to meet students’ needs clearly demonstrates the power of Kent State.” 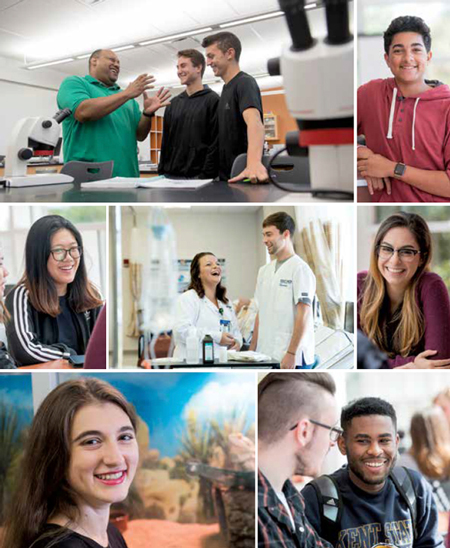 “Part of the power is knowing what we are and what our mission is,” Seachrist said. “There’s a way to help people find education where they can be successful. People make their own sense of place; wherever our students are, that’s Kent State to them.”

And for Davis, who is nearing graduation day, he has found a home away from home at Kent State Stark.

Pushing around his backpack on the floor near the lab where Lehnert’s team conducts its research, Davis leans closer to his computer. He traces the outline of a black-and-white image on the screen, encircling the pollen attached to an insect’s mouthpart. It’s the point where biology and botany intersect.

Fluorescent lighting shining above him, he acknowledges he was not always happy before finding his place at Kent State. But, at the university, Davis has developed his interests, propelling him to the next level – where he’s meant to be.

“I never thought I would be doing this, studying plants, but now I have direction,” he said. “I know  this is what I want to be doing with the rest of my life.”

He graduates this spring. Fitting, Davis explains of the timing, when gardeners everywhere prepare the plants they’ve nurtured throughout the winter. Placing each outside in direct sunlight, they’re ready to grow, to bud, to bloom.