Live Chat
Nathan Ritchey is the senior officer responsible for the oversight of the university's seven Regional Campuses. 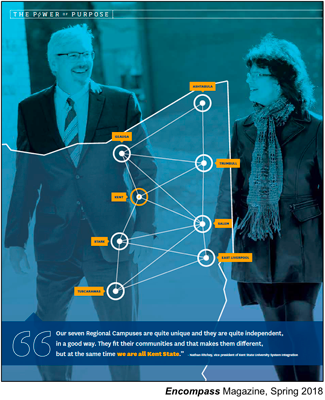 "Our seven Regional Campuses are quite unique and they are quite independent, in a good way. They fit their communities and that makes them different, but at the same time we are all Kent State."

Wind up with this: a purpose that’s bigger than you’d ever thought possible.

As Nate Ritchey climbed his way up the ladder of academia, step by step, he began to notice the view looked different from the top. Clearer. Working with notable high achievers is fine, but what about being a conduit for effecting truly meaningful change?

“At some point in my life, I realized the Harvards of the world didn’t need me,” said Ritchey, Ph.D., vice president of Kent State University System Integration. “I did not set out to do this, it chose me. The opportunities that I have had, the opportunities in my life have all centered around regional campuses.

“It’s a funny thing with purpose. We think we choose our purpose. But, for me, purpose came calling.”

In 2016, Ritchey began his work at Kent State University, moving from Edinboro, Pennsylvania, effectively culminating his work with high-achieving students after 25 years – first at Youngstown State University and, then, Edinboro University.

“It’s a good challenge – our seven Regional Campuses are quite unique and they are quite independent, in a good way,” Ritchey said. “They fit their communities and that makes  them different, but at the same time we are all Kent State.

“The challenge is to find the balance between system and self.” Ritchey embraces that challenge on a personal level. A mathematician who has worked in higher education for nearly 30 years, he finds himself in a role focused on resource sharing among the Kent State campuses. His goal is to grow enrollment while facilitating program collaboration, cost-saving measures and more effective use of resources.

“I have a Ph.D. in mathematics,” said Ritchey, who has authored numerous articles and co-authored several mathematics textbooks.  “I love researching. I love teaching. Our kids grew up thinking math was cool. “This role takes my skills to the next level.”

This mathematician would liken it to a phrase usually limited to math textbooks: an expression that represents repeated multiplication of the same factor. It’s called “power.”

And that’s what the Regional Campuses extend: the power of Kent State to their local communities.

"One of the greatest components of Kent State is that we provide a powerful, first-rate education for students who choose to go to a regional campus,” Ritchey said. “They get a Kent State education at a great value, but the quality isn’t diminished by cost.

“Staff and faculty at our Regional Campuses have the most noble mission: we take you as you are and we see you through to graduation. That’s what we aspire to be great at.”

And for some Regional Campuses in economically disadvantaged areas of the state, the hurdles are significant, Ritchey acknowledges. But he knows the purpose is in the offering. It’s the big break that overcomes barriers: an education.

“In many cases, we are offering the chance at a better life,” Ritchey said. “It’s a hard role, a wonderful role, but it’s a mission we accept. I accept it, gladly.”