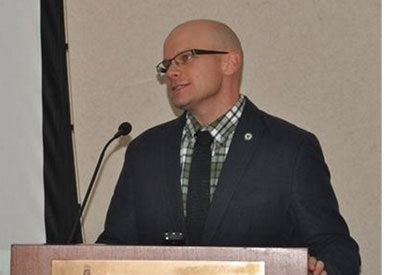 This article written by Patricia Faulhaber appeared in theSuburbanite.com on December 17, 2015.

Two of the most talked about historical facts for North Canton usually include the impact of the Hoover family and the Hoover Co. on the area.

But the name change that happened in 1918 is a big conversation starter, too. Before Feb. 3, 1918, North Canton was New Berlin.

A special seminar was held on Nov. 12 at Walsh University and was hosted by the North Canton Heritage Society. Three experts on the subject presented historical facts leading up to the name change, which happened during World War I when there was a growing anti-German sentiment across the U.S.

Cooley gave some background and historical facts about the Hoover family and The Hoover Co. Post gave the details of the name change and Davis presented the different ways the use of propaganda during the war impacted the sentiment.

Kathy Fernandez, director of the North Canton Heritage Society, said the reason for the seminar was to celebrate the restoration of an important historical pamphlet.

“We received a grant to restore a pamphlet prepared and printed during the anti-German zeal of America's entry into World War I in 1917 titled ‘Concerning the Name of the Village of New Berlin,’” Fernandez said. “It was originally printed by the Hoover Co. which was then known as the Hoover Suction Sweeper Co. The pamphlet details the reasons for changing the name of the town. It was distributed to all village residents and subsequent petitions resulted in the name change of the Village to North Canton.”

While New Berlin was among a number of cities and towns across the U.S. to go through a name change, it was a bit different because the movement was led by the town's leading industry, The Hoover Co.

“Two factors drove the decision to change the town's name: patriotism and the economic impact the name New Berlin was having on the town and on The Hoover Co.,” Post said. “The town's name became a hindrance to The Hoover Co. There were 648 signatures on the original petition in 1917 and 228 on a second petition making a total of 869 signatures and 173 more than was needed. There were many people in the area that objected and a remonstrance petition had 365 signatures against the name change.”

All of the speakers said there were many things that sounded German that also went through name changes, some temporary and some permanent. Sauerkraut became known as liberty cabbage and dachshunds were called liberty dogs.

For more information about North Canton's name change, contact the North Canton Heritage Society at 330-494-4791 or visit the website at www.northcantonheritage.org.