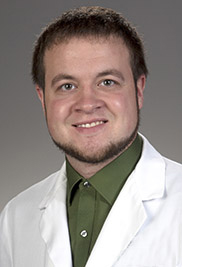 The National Collegiate Honors Council (NCHC) has named Dorvan Byler, a 2015 graduate of the Honors College and the College of Arts and Sciences at Kent State University at Stark, as a Portz Scholar for 2015. Byler is a native of Mt. Eaton, Ohio, and received his bachelor’s degree from the Department of History.

The National Collegiate Honors Council Portz Fund and Portz Scholars program are named after and honor the late John and Edythe Portz in recognition of their many contributions.

Each year, the council’s awards and grants committee invite honors programs nationwide to submit the exceptional work of one student for nomination.

Byler credits his success in the award process to Lindsay Starkey, Ph.D., assistant professor, and Leslie Heaphy, Ph.D., associate professor, both in the Department of History within the College of Arts and Sciences.

“I couldn’t have done it by myself,” says Byler. “Without their help, I’m fairly confident I wouldn’t have won this award.”

His thesis Flee From the Worship of Idols: Becoming Christian in Roman Corinth explores the developing Christian community during the first century in the city of Corinth.

"Dorvan's ability to situate his work in the context of other professional historians' research is particularly remarkable,” says Starkey, Byler’s thesis advisor. “In my experience, helping undergraduate students to understand this component of advanced historical scholarship is the hardest concept to teach. From the first time I met Dorvan, he showed me that he not only understood this component of historical scholarship, but he also wanted to take an active part in professional discussions about early Christianity.”

Byler is the eighth student from Kent State and the first from a Kent State Regional Campus to win the Portz Scholar award.

“I think some students don’t think they can do the same things at a Regional Campus that you can do at another kind of campus,” Heaphy says. “That’s just not true; this is one of the instances that proves it.”

For more information about the National Collegiate Honors Council and the Portz Scholars program, visithttp://nchchonors.org.