ARGUMENTS: WHAT ARE THEY AND WHY DO WE WRITE THEM?

When most people think of arguments, they picture two people fighting over different viewpoints. Therefore, many of us feel as if the argumentation process is meant to cause conflict rather than resolve it. However, arguments were invented to persuade others to alter or compromise their position on a certain topic.

To persuade your audience to reconsider their beliefs, you must, as the writer of your argumentative paper, move them from one position to a different one. To do this effectively, you should assess how resistant your audience will be to your position: Are they a neutral audience that is undecided about your topic? Or are they openly hostile to your stance and refuse to see your side of the argument? On this page you will find strategies to write for these audiences so you can convince them that your viewpoint is important.

When you use the Toulmin system, you are acting as a defense attorney would in a courtroom; you need to anticipate counter-arguments from the prosecutors and present evidence, so the judge will rule in your favor.

Claim: the position you try to get your audience to accept (thesis)

Warrant: the unstated assumption behind your claim (i.e., the statement of belief or principle)

Backing: evidence needed to support your warrant and to persuade your audience to gradually accept the beliefs and values that inform your claim

Finding Evidence to Support Your Argument
In order to support your argument’s claim, you must have evidence. Sources that are considered “evidence” include the following: the viewpoints and conclusions of experts/scholars, statistics from peer reviewed scholarly studies, and quotes from respected magazine, journal, & newspapers. You can find all three of these in the Opposing Viewpoints database. Go to www.kent.edu/stark/library, select the “Finding Articles” link in the left-hand menu, and scroll down and click on the “Opposing Viewpoints” link to access its homepage. 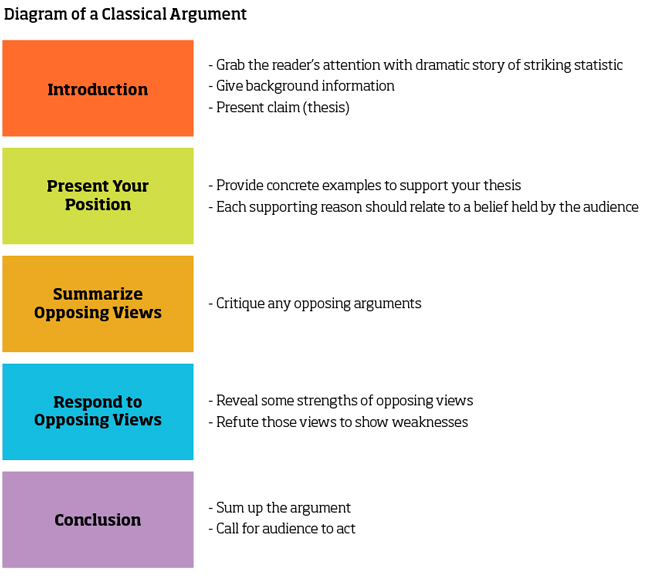 When Writing Rogerian Arguments, you: