Office of the Dean & Academic Affairs 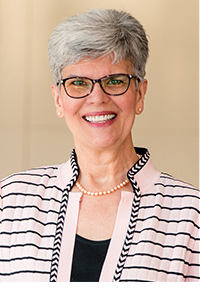 Denise A. Seachrist, Ph.D., accepted her appointment as the dean and chief administrative officer of Kent State University at Stark on Feb. 1, 2016. She previously served as the interim dean for Kent State Stark, a position she began on July 1, 2014. The Stark Campus is Kent State University’s largest regional campus and the only public university in Stark County.

Seachrist, who holds the rank of professor, has been recognized for her stellar career as a faculty member and administrator. She is the recipient of the Communal Studies Association Distinguished Service Award and the Heidelberg University Career Excellence Award. She is also a member of the inaugural class of the Crestview Local School District Distinguished Alumni Hall of Fame.

Active in the Stark County community, Seachrist currently holds board positions with the United Way of Greater Stark County and Women’s Impact. She previously served on the boards of the Canton Symphony, ArtsinStark, and the Canton Regional Chamber of Commerce, and she serves on the Executive Leadership Team of the Stark County Heart Walk campaign.

A specialist in the music of both historical and living German religious communities in Pennsylvania, Seachrist served as the president of the Communal Studies Association. She is a past member of the editorial advisory board of American Music (University of Illinois Press), the editorial board for a Pennsylvania-German History and Culture book series (Penn State Press), and the past series editor of the World Musics series (Kent State University Press).

Seachrist is the author of Snow Hill: In the Shadows of the Ephrata Cloister (2010) and The Musical World of Halim El-Dabh (2003), both published by the Kent State University Press.

Seachrist, who lives in Jackson Township, received her Ph.D. in musicology-ethnomusicology from Kent State University and a master of music degree in vocal performance from Youngstown State University. She earned her bachelor’s degree in music from Heidelberg University.