The 7th annual “Who’s Your Mama?” Environmental Film Festival will be held on Friday, April 19, at the Kent Student Center Kiva from 4 to 9 p.m. 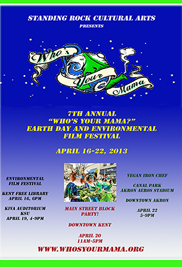 The 7th annual “Who’s Your Mama?” Environmental Film Festival will be held on Friday, April 19, at the Kent Student Center Kiva from 4 to 9 p.m. The event is hosted by Kent State University’s Office of Sustainability and the Standing Rock Cultural Arts.

The festival will feature screenings of short films, animated shorts and documentaries from a variety of producers. Tickets for the film festival can be purchased at the door. The cost is $5 for students and seniors, and $7 for general admission. Kids 12 and under are free.

Jeffrey Ingram, co-founder and executive director of Standing Rock Cultural Arts, says they want to provide a forum for anyone interested in the environment.

“Our goal is to help educate the public about environmental protection,” says Ingram.

The festival is part of a week-long series of Earth Day activities sponsored by Standing Rock Cultural Arts.

The series continues on Saturday, April 20, with the Main Street Block Party, featuring music and dance performances, alternative energy displays, ecological vendors and more. Main Street in downtown Kent will be closed between Depeyster and Water streets for the free event, which runs from 11 a.m. until 5 p.m.

“I hope the community wants to get involved because this is about our future and the next seven generations,” says Ingram. “We need to do what we can to preserve the Earth.”

For more information on the “Who’s Your Mama?” Environmental Film Festival, visit www.whosyourmama.org.