Fall 2013 Bowman Breakfast Will Explore “The International City of Kent” 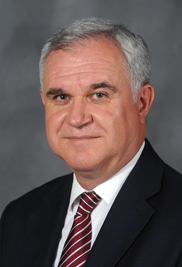 The fall 2013 Bowman Breakfast will take place at Kent State University in the Kent Student Center Ballroom on Wednesday, Oct. 2. Doors open at 7 a.m., breakfast begins at 7:30 a.m. and the program will follow at 8 a.m. The featured speaker is Marcello Fantoni, Ph.D., associate provost for global education at Kent State. Fantoni will speak on the topic “The International City of Kent.”

The cost to attend is $10 per person at the door, payable by cash or check. No invoicing is available for this event, and payment at the door is required.

Fantoni received his Ph.D. in history and civilization in 1991 from the European University Institute. In 1994, he was a visiting scholar at Brown University, and in 1998-1999 he was a fellow of the Harvard University Center for Italian Renaissance Studies.

In 2005, he was appointed director of the Kent State program in Florence, Italy, and in 2009 was named the university’s Europe manager, overseeing Kent State’s campuses in Florence and Geneva, Switzerland. He was named associate provost for global education at Kent State in 2012.

Since 2004, Fantoni has served as director of Centro studi Europa delle Corti and has served on the board of Centre de Recherche du Château de Versailles since 2007. He is president of Court Studies Forum, an organization he founded in 2007.

Kent State is committed to making its programs and activities accessible to those individuals with disabilities. If you or a member of your family will need an interpreter or any other accessibility accommodation to participate in this event, please contact the university’s accessibility liaison Jacqueline Gee by phone at 330-672-8667, by video phone at 330-931-4441 or via email at accessKSU@kent.edu.

Members of the media are welcome to cover this event.