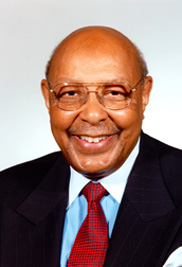 “I am very excited for the opportunity to serve as the Kent State President’s Ambassador and deem it quite an honor,” Stokes says. “I am excited to work with the school and the students.”

“Mr. Stokes achieved many firsts in the course of his successful career as a distinguished lawyer, former congressman and civil rights activist, and we are honored that he has accepted to partner with Kent State by serving as our new President’s Ambassador,” Lefton says. “I have no doubt that he will use his more than three decades of public service experience to help broaden the scope of our diversity initiatives and engage successfully with members of our university community and other Kent State partners in the larger community.”

“This is a tremendous opportunity and honor for Kent State to have Mr. Stokes serve in this capacity,” says Alfreda Brown, Ed.D., Kent State’s vice president for diversity, equity and inclusion. “He has been a champion for diversity and inclusion throughout his entire career and embodies the spirit of the President’s Ambassador program.”

Stokes practiced law for 14 years before serving in Congress. As a practicing lawyer, he participated in three cases in the U.S. Supreme Court, including arguing the landmark “stop and frisk” case of Terry v. Ohio. He played a pivotal role in the quest for social and economic justice, civil rights and equality throughout his career.

Stokes has received several awards and honors, recognizing his national leadership and commitment to public service. A number of landmarks in the city of Cleveland and nationally have been named in his honor, including the Louis Stokes Cleveland Veterans Administration Hospital, the Louis Stokes Annex of the Cleveland Public Library, the Louis Stokes Health Sciences Center at Case Western Reserve University, and buildings at Wilberforce University and Central State University, both in Wilberforce, Ohio, Howard University in Washington, D.C., and the National Institutes of Health in Bethesda, Md.

Stokes is the recipient of 27 honorary doctorate degrees. He received the Congressional Distinguished Service Award in 2003, becoming the first African-American to earn this honor. He was honored by the American Bar Association Commission on Racial and Ethnic Diversity in the Profession with a 2010 Spirit of Excellence Award for his dedication to expanding opportunity in the legal profession to all minorities. In 2011, he was inducted into the International Walk of Fame at the Martin Luther King Jr. Center for Nonviolent Social Change in Atlanta.