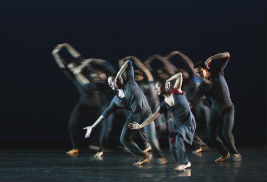 Kent State University’s Thomas Schroth Visiting Artist Series proudly presents a concert by one of the country’s foremost modern dance performance groups, the Limón Dance Company of New York City, on Friday, Dec. 6, at 7:30 p.m.  The performance will take place in E. Turner Stump Theatre in the Center for the Performing Arts (formerly Music and Speech Building), 1325 Theatre Drive in Kent. The event is free and open to the public. Tickets must be reserved by calling 330-672-ARTS (2787) or online at www.kent.edu/artscollege. A complimentary dessert reception will immediately follow the concert in the Roe Green Center lobby, adjacent to E. Turner Stump Theatre.

Under the artistic direction of Carla Maxwell, the Limón Dance Company is hailed as one of the world’s greatest dance companies. The Limón Dance Company has been at the vanguard of American modern dance since its inception in 1946. The company is the living legacy of the dance theater developed by José Limón and his mentors, Doris Humphrey and Charles Weidman, whose innovative works revolutionized the American dance. After Limón’s death in 1972, the company pioneered the idea that it was possible to survive the death of its founder, setting an example for the entire dance field. Now in its 67th year, the company is renowned for its technical mastery and dramatic expression, and demonstrates both the timelessness of Limón’s works and the humanistic vision that guides the repertory choices.

“I am most especially thrilled that Kent State is able to present a free performance to the public by the Limón Dance Company,” says John R. Crawford, dean of Kent State's College of the Arts and dancer by trade. “Years ago, I studied the José Limón technique, later performed and then eventually taught the Limón principles of style. The company has such a rich dance history and impressive reputation. I encourage everyone to attend the concert to experience firsthand this expressive and passionate form of dance.”

Current Artistic Director Carla Maxwell worked closely with Limón before becoming artistic director in 1978. The company has been committed to producing and presenting programs that balance classic works of American modern dance with commissions and acquisitions from contemporary choreographers, resulting in a repertory of unparalleled breadth. In its first half-century, the company achieved many important milestones: It was the first group to tour under the auspices of the American Cultural Exchange Program (1954), the first dance troupe to perform at Lincoln Center (1963) and has had the honor of appearing twice at the White House (1967 and 1995). More recently, the José Limón Dance Foundation was awarded a 2008 National Medal of Arts, the nation’s highest honor for artistic excellence.

The Schroth series was established in 2002 by the late Max and Cil Draime of Warren, Ohio, to honor their dear friend, Tom Schroth (1922-1997). A noted regional architect, Schroth designed the Butler Institute of Art’s Trumbull museum in Howland, Ohio, as well as numerous other award-winning projects. Schroth spent his life in Niles, Ohio, as a prominent architect and inveterate collaborator in the artistic life of the Mahoning Valley and Northeast Ohio. A world traveler, he saw human creativity as a window that frames human experience. The Thomas Schroth Visiting Artist Series brings diverse views through that window to the Kent Campus and community. The events are always free and open to the public.