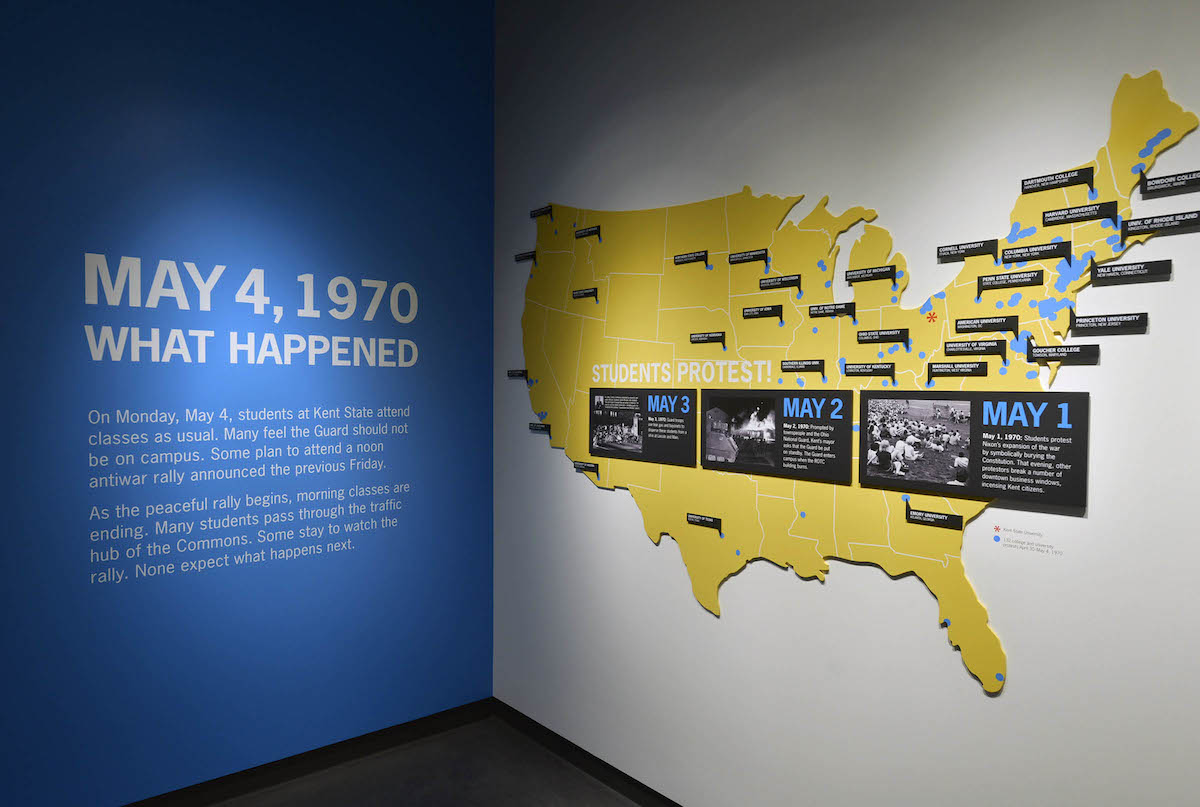 The Kent State University May 4 Visitors Center has won two awards for the center’s exhibits. The Kent State May 4 Visitors Center received the American Association for State and Local History’s (AASLH) 2014 Award of Merit. The AASLH Award of Merit recognizes excellence for projects that include civic engagement, special projects, educational programs, exhibits and exceptional achievement in the preservation and interpretation of state and local history. The May 4 Visitors Center also won the Council on International Nontheatrical Events (CINE) Special Jury Award for a film created for one of the center’s three galleries.

Lori Boes, assistant director of the May 4 Visitors Center, applied for the AASLH 2014 Award of Merit, providing information that was reviewed by a local historian before it was submitted to the AASLH.

“Some of the things they were interested in were the importance of the exhibit to the institution, the mission, who the target audience is for the exhibit and how the exhibit is going to sustain itself,” Boes said. “They also wanted us to show them photographs, sample label copies, a floor plan and list of artifacts in the center. They don’t actually come to the site, so the application has to represent what’s in the center.”

The exhibit was created by Laura Davis and the late Carole Barbato, who passed away suddenly this past April. Both Davis and Barbato were Kent State professors who retired recently, and were students at Kent State at the time of the shootings on May 4, 1970.

The CINE Special Jury Award was a surprise to Boes. The film, shown in the May 4 Visitors Center, won the CINE 2013 Golden Eagle Award. It was then selected by the CINE Special Jury Committee as the best in the Arts and Exhibits Programs category.  The film, called “A Turning Point,” is an 11-minute original film that tells the story of May 4, 1970, from the students’ point of view as that day unfolded.

“The film presents visual evidence from archival films, photos, geospatial map animations, along with audible evidence from an actual recording of the gun shots and the controversial order to fire by the National Guard,” said Mike Buday of GTOO Media, who is the producer of the film and who also applied for the CINE 2013 Golden Eagle Award. “It concludes with a poignant tribute in memoriam to the four students who were killed and the nine wounded, and provides viewers with a somber and sobering takeaway as they react to the aftermath of this tragic story, almost as if it just happened.

”  Buday said the intent of the film is to provide a clearer sense of why the students were protesting the Vietnam War, how they were exercising their First Amendment rights on campus and to confront the senseless and inexcusable fact that deadly force was used by the authorities.

Both Buday and Boes dedicate the awards to Davis and Barbato, whose work, they said, made the film what it is today.

“This award belongs most to Laura and Carole for their extraordinary dedication,” Buday said. “I share with them, and the many others credited on this film, a feeling of pride and the sense that this important story has much to offer us all for the future. I can't help but think there is some divine hand at work with this special award in light of Carole's recent passing.”

For more information about the American Association for State and Local History, visit www.aaslh.org.

For more information about the Council on International Nontheatrical Events, visit www.cine.org.

Photo Caption:
Kent State University's May 4 Visitors Center tells the May 4, 1970 story, set against the political and cultural changes of the 1960s.