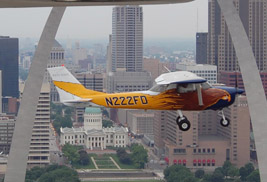 “Typically nine events take place,” Mangrum says. “There are four flying events and five grounded events. The students are judged on their ability to safety operate the aircraft and land it. The goal is to raise their performance level with an emphasis on safe operation of an aircraft.”

“In terms of aviation, this is like our football team,” Mangrum says. “We are in Region III with the powerhouses.”

Mangrum explains that, although Kent State has tough competition, the flight team is up for the challenge because the award-winning team ranked first in the regional conference in 2008. The team has also won several awards, including the Loening Trophy for Best Collegiate Aviation Program in the country and the Collegiate Aviation Progress Award for most progress in collegiate aviation.

Bethany Jones, a senior aeronautical science student, says she is participating in the event because she hopes to build a career as a pilot when she graduates. She says participating in SAFECON is giving her valuable experience to pursue her dream.

“I am learning additional skills through this event that I can take into a job interview and impress my future employers,” Jones says. “It’s beneficial to learn about planes, regulations and flying procedures.”

Jones will be participating in two events this year, the E6B Manual Flight Computer, which is focused on the mathematics of flying an aircraft, and Message Drop, which is a flying event centered on dropping objects from the plane to reach a target.

Mangrum explains that the flight team prepares for the regional SAFECON throughout the year with a goal of qualifying to compete for the national conference.

“Being involved in Flight Team is a lot of work,” Jones continues. “I am involved in flight team activities, which add up to about seven hours a week, which I spend at the airport and on campus. I’m learning valuable experience that is beneficial and fun.”

Mangrum says that students who attend Kent State and become involved in the flight team have an advantage over other students in this specific job market.

“SAFECON sets our students apart from others,” Mangrum says. “They gain hands-on experience, and it’s also a tremendous networking tool . Because professionals in the field attend the events, Kent State  students have the opportunity to meet professionals and present their skills.”