Kent State University’s Cleveland Urban Design Collaborative (CUDC) will have its “Pop Up City” initiative featured in the “Spontaneous Interventions: Design Actions for the Common Good” exhibition at the Chicago Cultural Center through Sept. 1.

Kent State University’s Cleveland Urban Design Collaborative (CUDC) will have its “Pop Up City” initiative featured in the “Spontaneous Interventions: Design Actions for the Common Good” exhibition at the Chicago Cultural Center through Sept. 1. “Pop Up City,” a temporary-use project, which activates some of Cleveland’s most spectacular but underutilized vacant places as havens for cultural and arts activities, is one of 84 national projects that are on display in Chicago. 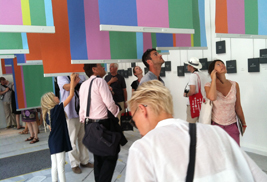 The “Spontaneous Interventions: Design Actions for the Common Good” exhibition, which helps to bring improvements to the urban realm and creates new opportunities and amenities for the public, was the official U.S. presentation at the 13th International Architecture Exhibition at the Venice Biennale in Italy last year. Kent State’s “Pop Up City” initiative also was a part of that presentation, which received more than 178,000 visitors in Venice, and earned a special mention from the Golden Lion jury. It was the first time the United States has been honored in the history of the Venice Architecture Biennale.

“The Venice Biennale is the largest and most recognized architecture exhibition in the world,” said Terry Schwarz, director of Kent State’s Cleveland Urban Design Collaborative. “To have the CUDC’s work included in this show is a major accomplishment – one that brings positive recognition for the College of Architecture and Environmental Design and for Kent State. The Chicago exhibition is a pared down version of the Venice show, and we are very pleased that ‘Pop Up City’ was selected for inclusion.”

The Institute for Urban Design searched for several months and collected examples of more than 450 inspiring urban interventions for potential inclusion in the exhibition. Kent State’s “Pop Up City” project is presented as part of an archive of actionable strategies to improve the public urban realm.

Schwarz said the Chicago show will attract a more regional audience of design practitioners, students and the members of the public who might not have had a chance to see the show in Venice.

“Short-term interventions allow us to activate the city and transform vacant buildings and sites, which are abundant in Cleveland,” Schwarz said. “There is quite a lot of work involved in some of our temporary interventions, but we have a network of partners and friends who help us envision and implement pop-up projects in response to specific opportunities and needs.”

The Environmental Design Research Association also selected Kent State’s Cleveland Urban Design Collaborative to receive the Great Places Award for its work on “Pop Up City.” The award was presented in Providence, R.I., on June 1.

“The CUDC’s work is groundbreaking, and the design community’s awareness of this work is obviously wonderful for Kent State University and the College of Architecture and Environmental Design,” said Douglas Steidl, dean of Kent State’s College of Architecture and Environmental Design. “However, the true value of the CUDC’s research and creative activities manifests itself in the benefits that accrue to citizens, not only in Northeast Ohio, but around the world where their lives are improved as a result of the CUDC sharing concepts, which enhance the work of designers and planners around the globe.”

For more information about the “Spontaneous Interventions: Design Actions for the Common Good” exhibition, visitwww.spontaneousinterventions.org.

Photo Caption:
Kent State University’s Cleveland Urban Design Collaborative will have its “Pop Up City” initiative featured in the “Spontaneous Interventions: Design Actions for the Common Good” exhibition at the Chicago Cultural Center through Sept. 1. Pictured is the “Spontaneous Interventions” exhibition at last year’s Venice Biennale in Italy on its opening day. In all, 124 urban interventions were presented, each on a separate panel that visitors pulled down from the ceiling of the exhibition space.