More than 30 RNs and physicians honored as outstanding nurse preceptors 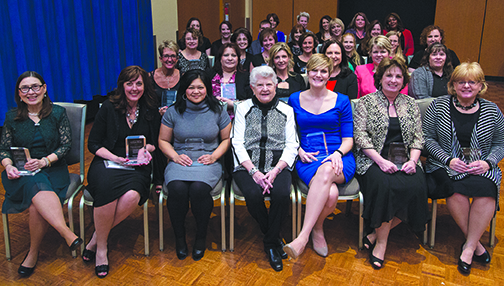 The ninth annual Barbara Donaho Distinguished Leadership in Learning Awards Ceremony was held at the Kent State University Student Center Ballroom on March 21. Kent State’s College of Nursing hosted the event with nearly 200 people in attendance, including award recipients, faculty, staff and guests. This year’s recipients were registered nurses and physicians from the Kent area who work in a variety of capacities – from staff nurses to advanced practice nurses, as well as physicians. Known as “preceptors,” these dedicated nursing professionals were recognized for generously donating their time to help mentor, train and develop Kent State’s nursing students in clinical settings.

Started in 2007, the award is named after Barbara A. Donaho, a long-time friend and supporter of Kent State and the College of Nursing.

“This year, we honored 31 preceptors from 24 hospitals, clinics, health networks, private medical practices and public health agencies in Northeast Ohio,” Donaho said. “Over the past nine years, we’re proud to have awarded a total of 287 nurses and physicians for their significant contributions.”

Donaho’s distinguished career includes roles as a director of nursing, senior vice president of patient services and most recently as president and CEO of St. Anthony’s Health Care Center in St. Petersburg, Florida. She also holds an honorary doctorate of law degree from Kent State.

“Acting as a preceptor is no easy task,” said Barbara Broome, dean of Kent State’s College of Nursing. “It is a huge responsibility and critically important to the development of our future nurses. We are thankful for all of the area healthcare organizations that make it possible for their exceptional nurses to mentor our nursing students. It’s just one of the advantages Kent State nursing students have, which helps set them apart, and of course, we are grateful to Barbara Donaho for her generosity, vision and continuing support.”

“Both of my preceptors were honored to receive recognition for their outstanding work,” said Lynda Urdzik, Kent State College of Nursing master’s student and Twinsburg, Ohio, native. “I am grateful that Barbara Donaho and Kent State's College of Nursing take time to recognize these wonderful, hard-working preceptors.”

About Kent State’s College of Nursing
In existence for nearly 50 years, the College of Nursing at Kent State University is one of the largest and most comprehensive nursing programs in the nation. As part of Kent State’s eight-campus system, the college provides more than 2,000 nursing students courses of study at the baccalaureate, master's and doctoral levels. The college is a recipient of the American Association of Colleges of Nursing Innovations in Professional Nursing Education Award and was named by the National League of Nursing as a Center of Excellence in Nursing Education in 2013. In addition, the college’s BSN program is Ohio’s only five-time recipient of scholarship funding from the Robert Wood Johnson Foundation New Careers in Nursing Scholarship Program (NCIN). To learn more about nursing programs at Kent State, visit www.kent.edu/nursing.