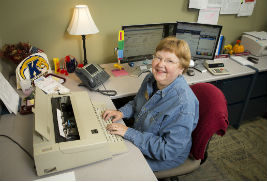 After serving 47 years at Kent State University at Stark and honorably earning the title of the longest-serving staff member of the university, Linda Harsh, clerical specialist, plans to retire this December.

Harsh began her career at Kent State while she was still in high school, working part-time in the registrar’s office.

“I was hired making 60 cents an hour to file and assemble admission packets,” says Harsh. “When I graduated high school in 1966, I was hired for a full-time position in the admission’s office.”

“In the last six years, I have not been in an outer office waiting on people as they came in,” says Harsh. “I have been moved to a different, more hidden area, so I can work without as many interruptions. This helps get applications processed more quickly so that students are able to register for classes faster.”

As Harsh reflects on the last 47 years at Kent State Stark, she says her most memorable time was the events of May 4, 1970.

“I was working during that time,” says Harsh. “I remember all the fear that was in everyone’s mind when it was happening at the Kent Campus. Since Stark is close, we didn’t know whether the problems would come down to us or not.”

Also memorable for Harsh are the changes she has witnessed on the Stark Campus throughout her career.

“I am impressed with the way things have changed,” says Harsh. “As a campus, our enrollment has increased by a great amount. I remember when I used to register students with a piece of paper and a pen, but now, students do everything electronically.”

Harsh says after retirement, she will miss her coworkers the most. She says she will miss having personal conversations and becoming friends with the staff around her.

“I’ve always tried to have a positive attitude and smile,” says Harsh. “Students have told me I always have a smile on my face when I pass them in the hallway. I try to have a positive influence on everyone and let them know they are special."