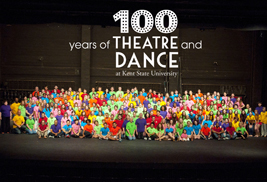 Kent State University’s School of Theatre and Dance will celebrate the 100th anniversary of theatre and dance at Kent State on Oct. 25 with a scholarship fundraising dinner and the opening of the musical Plain and Fancy.

Theatre and dance was introduced to students and public audiences at Kent State with the founding of the Walden Drama Club in 1913 and the offering of formal drama classes in 1926. Under the guidance of E. Turner Stump, from the 1930s through the 1950s, theatre grew and transitioned from an extracurricular activity to a nationally recognized academic division. The summer professional theatre program, Porthouse Theatre at Blossom Music Center, was established in 1971. In 1983, the Division of Theatre separated from the School of Speech and became the School of Theatre, offering undergraduate and graduate degrees.

Formal dance classes were offered through the physical education department, beginning in the 1960s, and preparations for a degree in dance were made throughout the 1970s. The first student dance major graduated with a B.S. in dance in 1980, and the Kent Dance Ensemble was established in 1990 to provide pre-professional experiences for dance students. A concentration in dance education was introduced in 1993.

The Roe Green Center for the School of Theatre and Dance, located in the newly named Center for the Performing Arts (formerly Music and Speech), has become the face of theatre and dance at Kent State. The school currently offers a bachelor of arts degree; bachelor of fine arts degrees in musical theatre, design and technology, dance performance, and dance education; and master of fine arts degrees in acting and in design and technology.

To celebrate the100th anniversary, a fundraising dinner benefiting theatre and dance student scholarships will be held on Friday, Oct. 25, at 6 p.m. in the Erdmann-Zucchero Theatre, located in the Roe Green Center of the Center for the Performing Arts, 1325 Theatre Drive. The opening performance of the musical Plain and Fancy will take place following dinner in the E. Turner Stump Theatre. Fundraiser tickets, including dinner, admission to Plain and Fancy and a $25 tax-deductible donation, are $100 per person. Tickets for only dinner and admission to Plain and Fancy are $75 per person. To make your reservation, contact Pam Huston at phuston1@kent.edu or 330-672-8334 by Oct. 22.

Tickets for Plain and Fancy are available by calling 330-672-ARTS (2787), online at www.theatre.kent.edu or in person at the Performing Arts Box Office located in the Roe Green Center lobby, Monday – Friday, noon to 5 p.m.