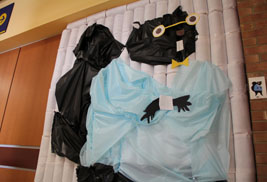 Four teams competed for a first prize of $300 and a second prize of $200. Although the teams were in competition with each other, the real winners are the families benefiting from the Portage County Food Drive.

The Kent State Blackstone LaunchPad, a program that promotes entrepreneurship located on the first floor of the Kent Student Center, came in first at the competition.

“It was very rewarding to participate in a fun competition that directly benefits those in need,” says Katherine Harmon, program manager of Kent State’s Blackstone LaunchPad.

The team from Blackstone LaunchPad sculpted a replica of its mascot, Burt Blackstone, the entrepreneurial squirrel, using 143 rolls of paper towels and 108 cans.

“We wanted to use this worthwhile opportunity to showcase our program’s mascot, Burt,” Harmon says.

Second place was awarded to the Division of Information Services, which made a town out of cans and boxes of food. Also participating in the competition was University Health Services with a replica of a prescription bottle made out of cans, toilet paper and tea bags, and Sigma Phi Epsilon, which constructed its fraternity letters out of cans.

The Can Sculpture Competition was organized by Christopher Hicks, senior integrative studies major and student worker for the Division of University Relations. All items used in the structures were donated to the Portage County Food Drive.