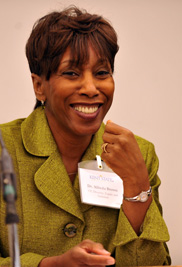 The National Diversity Council has named Kent State University’s vice president for diversity, equity and inclusion, Alfreda Brown, Ed.D., recipient of the 2013 Ohio Glass Ceiling Award. The award recognizes women who have overcome barriers to climb to the top in their professions and also have made it possible for others to follow in their footsteps.

Brown was selected for her leadership, excellence and accomplishments, and was awarded at the 2013 Ohio Women’s Conference Award Luncheon on May 30 in Cincinnati.

The National Diversity Council, established in 2008, champions diversity and inclusion nationwide, and is the first nonprofit organization to bring together private, public and nonprofit sectors to discuss the benefits of a multicultural environment.

“I am elated,” Brown says. “I realize that ‘breaking the glass ceiling’ is something that most professional women strive for – to be at the top of their careers and breaking through barriers that were once closed to most women. Becoming a vice president is truly a barrier breaker for me, first as a person of color, and secondly, as a woman in higher education. There aren’t a lot of us. Women are still a minority in many top positions.”

Brown joined Kent State in 2009, heading the university’s Division of Diversity, Equity and Inclusion. In her role, she oversees Kent State’s diversity and inclusion programs, which include the Office of Diversity Programming, Office of Planning and Diversity Assessment, the Lesbian, Gay, Bisexual, Transgender and Queer (LGBTQ) Center, Student Multicultural Center, Women’s Center and Upward Bound Pre-College Programs. She is a strong advocate for strategic planning and outcomes-based assessments to facilitate fact-based decision making and the constant improvement of diversity initiatives.

She encourages women to never give up on their desire to excel, and to be ready to watch, learn and engage within their circles.

“I totally believe a woman can accomplish anything, and believing that will give her a head start toward finding how to tap into her greatness,” Brown says. “Women have to know how to build important relationships that connect them to the people they need to know, including those who believe in their capabilities because relationships increase visibility.”

Brown is a member of several organizations, including the National Association for Diversity Officers in Higher Education, American Council on Education Ohio Women’s Network, Our Lady of the Elms Board of Trustees, Kent League of Women Voters and Kent City Schools Steering Committee. She also is involved with the Rochester Black Women’s Leadership Forum.

Brown holds a bachelor’s degree from Roberts Wesleyan College, a master’s from the Rochester Institute of Technology and a doctoral degree from Nova Southeastern University.

For more information about the National Diversity Council, visit www.nationaldiversitycouncil.org.