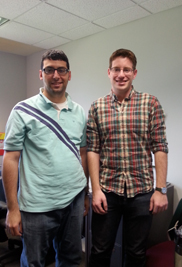 “It felt good to represent the anthropology department here at Kent State,” says Rafeedie. “The department has done a lot for us as students and for me personally, and I think they deserve to be represented well.”

The two-hour competition pitted students from colleges and universities all over the Midwest against each other. Contestants were quizzed on four fields of anthropology: cultural, biological, linguistics and archaeology.

Both Rafeedie and his professor, Richard Feinberg, hope to see the competition expand into a larger portion of the conference.

“The general feeling is that the competition was pretty successful,” says Feinberg. “It stands a good chance at becoming annual.”

The winning team won free admission into next year’s competition. Rafeedie encourages all anthropology students to attend both the Central States Anthropological Society conference and the “Anthropology Bowl.”

For more information about Kent State’s Department of Sociology, visitwww.kent.edu/sociology.