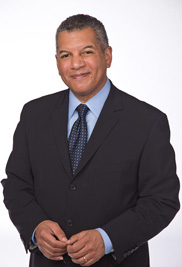 Russ Mitchell, managing editor of evening news and lead anchor of the 6 p.m. and 11 p.m. newscasts on WKYC Channel 3 News in Cleveland, has been named the 2013 recipient of the Robert G. McGruder Award for Diversity by the School of Journalism and Mass Communication at Kent State University. The award recognizes the accomplishments of media professionals who encourage diversity in the field of journalism.

The School of Journalism and Mass Communication will honor Mitchell at an awards luncheon and lecture on Tuesday, April 2, at noon, on the Kent Campus. The luncheon is by invitation only. The annual McGruder Lecture will take place at 2:15 p.m. at the Kent Student Center Kiva. The lecture is free and open to the public. Mitchell will be the keynote speaker at the lecture.

Betty Lin-Fisher, an 18-year veteran of The Akron Beacon Journal, will be recognized at the annual McGruder luncheon as the 2013 Diversity in Media Distinguished Leadership Award winner. She is the first Asian-American to be acknowledged with this award.

The luncheon and lecture are co-sponsored by the School of Journalism and Mass Communication and the Division of Diversity, Equity and Inclusion.

This year marks 10 years of honoring diversity excellence with the Robert G. McGruder Award for Diversity, and it has become one of Kent State’s most successful diversity events.

The luncheon will include comments by Lin-Fisher, and special awards will be given to student media representatives who have reported on diversity issues in the past year. Special guest Annette McGruder will be honored for her ongoing support of this program over the past 10 years.

Todd Diacon, Kent State’s senior vice president for academic affairs and provost; Alfreda Brown, vice president for diversity, equity and inclusion; and Stan Wearden, dean of the College of Communication and Information, will speak at the luncheon.

For more information about the Robert G. McGruder Award or event, contact Eugene Shelton, associate professor in the School of Journalism and Mass Communication, at eshelto1@kent.edu. To RSVP for the event, contact Darlene Contrucci at 330-672-2623.