Kent State University presents a lecture by Frédéric Brenner, a contemporary French photographer documenting the lives of the Jewish community 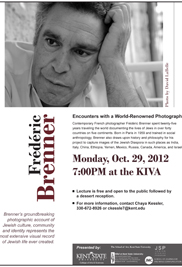 Kent State University presents a lecture by Frédéric Brenner, a contemporary French photographer documenting the lives of the Jewish community, on Monday, Oct. 29, at 7 p.m. in the Kent Student Center Kiva. The lecture is free and open to the public.

Brenner is best known for his opus “Diaspora,” the result of a 25-year search in 40 countries to create a visual record of the Jewish people at the end of the 20th century. During the lecture, he will share his photos and experiences about his journeys.

“Diaspora” was published as a two-volume set of photographs and texts by Harper Collins in 2003 and appeared in four foreign editions. “Diaspora” is also a major exhibition, which opened at the Brooklyn Museum of Art in 2003 and since then has been shown in nine other cities in the United States, Europe and Mexico.

“Brenner’s enthusiastic approach to his art and his profound insights into the human condition will excite all those who attend his presentation,” says Chaya Kessler, director of Kent State’s Jewish Studies program.

Brenner published five other photographic books and has had solo exhibitions at such major venues as the International Center of Photography in New York City; Musée de l’Elysée in Lausanne, Switzerland; Bellas Artes in Mexico City; and Rencontre Internationale de la Photographie in Arles, France.

Born in Paris in 1959 and trained in social anthropology, Brenner, now living in Israel, also draws upon history and philosophy for his project to capture images of the Jewish Diaspora in such places as India, Italy, China, Russia, Canada and the United States.

The lecture is presented by Kent State’s Jewish Studies Program and supported by the university’s College of Arts and Sciences, School of Art, School of Journalism and Mass Communication, and Hillel at Kent State University.