By definition, a Professional Improvement Leave, also known as sabbatical, involves a rest from the day-to-day grind of teaching. 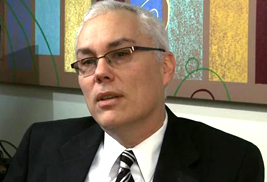 By definition, a Professional Improvement Leave, also known as sabbatical, involves a rest from the day-to-day grind of teaching.

It seems that someone forgot to explain that to Daniel Raymond Nadon.

In 2004, Nadon, an associate professor of theatre at Kent State University at Trumbull, took such a leave, but rather than taking up stamp collecting or renovating his kitchen, he traveled cross-country to Los Angeles, Calif., and began an association that has today culminated in his latest published work, Staging Social Justice: Collaborating to Create Activist Theatre.

The book, which Nadon co-edited with author and artistic director Norma Bowles, chronicles the activities of Fringe Benefits, an award-winning L.A.-based theatre company, which collaborates with schools and communities to create plays that promote constructive dialogue around diversity and discrimination issues.

Staging Social Justice is a collection of essays about the company’s script-devising methodology and their collaborations in the United States, Australia, Canada and the United Kingdom. The anthology also describes the transformative impact of these creative initiatives on participants and audiences. By reflecting on their experiences working with these projects, the contributing writers, artists, activists and scholars provide the reader with tools and inspiration to create their own theatre for social change.

“Norma and I had met many times, at the Association for Theatre in Higher Education Conferences,” says Nadon. “I knew about the groundbreaking work she was doing with her troupe and, as I was making plans for my Professional Improvement Leave, I asked if I could spend some time working with them. She said yes, and off I went.”

Nadon spent the next six months in Los Angeles where he learned the troupe’s methodology, while also directing a touring production of their signature play Cootie Shots, which ran throughout the Los Angeles Unified School District.

During this time, Bowles was also in the midst of developing her Theatre and Social Justice Institute process, wherein she would visit multinational universities and communities to help them, using theatre, to combat various discriminations (racism, sexism, homophobia, ablism, etc.) and promote social justice.

“I jokingly said to Norma that we should be documenting the entire process and someday write a book,” Nadon says, laughing. “So, I unknowingly planted that seed in her head and here we are almost 10 years later, book in print!”

Nadon, who assisted in the development of Kent State’s new theatre and social change minor, has hopes that the book will be used as a tool by instructors in a variety of disciplines at the university level. The scope of the book reaches beyond theatre into the fields of psychology, religious studies, sociology and justice studies.

“It really works well as a teaching tool,” Nadon says. “It’s a roadmap of sorts, demonstrating Fringe Benefits’ process of using theatre to spread messages of inclusion, diversity and tolerance. It is written as a ‘how to’ manual that people can access in a classroom or community center to replicate our process. It can be used by anyone who wants to make a positive inclusive impact, but who is unsure of how to begin. Our book will take them through it all, step by step.”

Staging Social Justice: Collaborating to Create Activist Theatre is published by Southern Illinois University Press and is available at online at Amazon and Barnes and Noble.