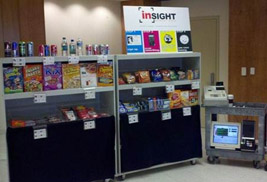 Cesar Zamudio, assistant professor in the Department of Marketing and Entrepreneurship at Kent State University, along with College of Business Administration doctoral student Paul Mills, received a $10,500 grant from the Marketing Science Institute (MSI) for their submission to the institute’s research proposal competition.

The Marketing Science Institute received 35 research proposals for the competition that was themed “Mobile Platforms, Location-Based Services and Their Impact on Consumers.”

Zamudio and Mills’ submission, “Snap Coupons: Scanning for Discounts at the First Moment of Truth,” was one of six winning research proposals. Both decided to enter  because of Zamudio’s expertise in consumer choice research, and Mills’ interest in conducting research to illuminate how new technologies influence how consumers shop and make purchases.

“Snap Coupons” are a new smartphone-based couponing mechanism. Their proposal seeks to investigate factors that influence consumers’ decisions to scan products prior to purchase. Snap coupons are generated when a consumer scans a product with a smartphone app.

“More importantly, our research is a field experiment in which the face value of a coupon, the depth of the coupon’s discount and the presence of competing coupon offers from other brands will be manipulated in such a way that the coupons that maximize coupon redemption and product consumption will be discovered,” Zamudio says.

Mills says two aspects of the proposed product were evaluated at the competition. The judges looked at its academic contribution and the potential for practical application to the industry.

The proposals were blind-reviewed by six judges from Harvard University, University of Pittsburgh, University of California-Riverside, Columbia University, New York University and AT&T Labs. These judges were recognized for their expertise in the study of the role of new technologies on consumer behavior, says Zamudio.

As winners of the competition, Zamudio and Mills will use their grant to pay for data and computer programming of the software that generates the mobile coupons. Mills says in 2011, he ran a successful pilot test with the smartphone developer, Insight Market Data, in a small kiosk store.

“The MSI grant allows Dr. Zamudio and me to expand a real-world shopping setting where we are partnered with a full-service, 30,000-square-foot supermarket for this research,” says Mills.

Mills says the most difficult part in developing the research proposal was choosing which question to focus on because of the newness of the technology. Zamudio and Mills expect many other interesting studies to come out of this research.

“It feels great to be one of six winners of the research competition,” says Zamudio, “As an assistant professor, winning a research grant from a prestigious institution such as the Marketing Science Institute is an important accolade; much more for Paul as a first-year Ph.D. student.”

“It is personally rewarding, but I am also motivated by the idea that Kent State could successfully compete with some highly regarded schools, and end up on a shortlist with researchers from Columbia, Michigan and Carnegie-Mellon,” says Mills.