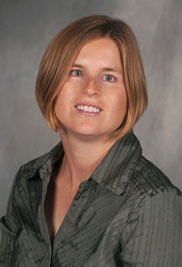 Parkinson’s disease affects about 1.5 million Americans, and it often leads to decreased independence and increased reliance on caregivers and the healthcare system for individuals living with it. But research conducted by Kent State University’s Angela Ridgel, Ph.D., shows reduced symptoms of the disease with the use of exercise using motorized bicycles.

Ridgel, an assistant professor in exercise science/physiology at Kent State, recently received a two-year, $390,900 grant from the National Institutes of Health to continue her work to design and test “smart” motorized  bicycles, which could access individual effort, performance, skill level and therapeutic value in order to maximize the benefit.

Ridgel and her research collaborators, Kenneth Loparo at Case Western Reserve University and Fred Discenzo at Rockwell Automation, are seeking people, ages 50-79 years old, with a clinical diagnosis of idiopathic Parkinson’s disease to partake in a clinical trial that will be held over a one-week period at Kent State. There is no cost for participants.

“After we complete this study, we anticipate that participants will be able to move better for a period of time after the exercise,” Ridgel says. “Furthermore, the information gathered from this research will allow for future exercise recommendations for individuals with Parkinson’s disease and other neurological disorders.”

For more information or to see if you are a candidate to participate in the clinical study, contact Ridgel at aridgel@kent.edu or 330-672-7495.