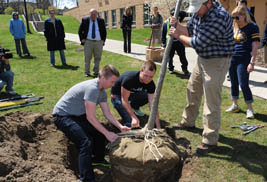 Kent State University faculty, staff and students collected 299,552 pounds of recyclables during the 2013 RecycleMania challenge. This year, 523 colleges and universities across the United States and Canada participated in the eight-week competition that ranks schools based on how much recycling, trash and food waste is collected.

Kent State’s Per Capita Classic, or the amount of recycling collected per person, was nearly 11 pounds based on the population at the Kent Campus. That was enough to retain the Braggin’ Wheel for a second consecutive year in an informal competition with The University of Akron. Akron’s Per Capita Classic was 6 pounds per person.

A new addition to the competition was E-cycleMania, where schools collected and tracked the amount of unwanted electronics, such as computers, printers, consumer electronics and other e-waste materials. Kent State ranked 49 out of 79 schools in this area, collecting 11,555 pounds of e-waste. Nearly 5,000 pounds of the total came from a one-day drive, where members of the Kent community were encouraged to bring in their unwanted electronics to a central drop-off location.

RecycleMania at Kent State is coordinated by the sustainability office, which promotes recycling and waste reduction year-round. Melanie Knowles, sustainability manager, says this is the fourth year Kent State has participated in RecycleMania, and she has seen improvement in the rankings each year. For example, Kent State’s per capita numbers show an increase of 44 percent over the 2012 results.

“RecycleMania has been a great driver for improvement in recycling rates on campus,” says Knowles. “Each year during the two-month competition, we have more participation and see more enthusiasm among employees and students. I’m already excited to see what we can do next year.”

Other results from Kent State RecycleMania include:

While the eight-week contest is a good time for students, faculty and staff to be mindful to reduce, reuse and recycle, Knowles says the key is to continue the recycling habit throughout the year.

She reminds everyone that recycling on the Kent Campus is easy because it is single stream, which means plastic containers (#1 and #2), glass, aluminum, paper, paperboard and corrugated cardboard, can all go in the same recycling container, indoors or outdoors.