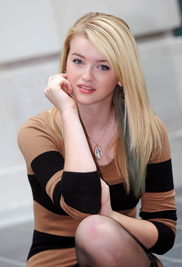 Kent State University student Kaci Cramer’s modeling dreams came true when she made it on cycle 19 of Tyra Banks’ show, "America’s Next Top Model." Cramer, a fashion merchandising freshman, is a bright-eyed blonde from Pennsylvania. She is tall, slender and appears timid until she gets in front of a camera. Then, Cramer becomes a bright-eyed blonde with ferocity and a sassy attitude.

At 19 years old, Cramer has faced public triumph and failure at the same time. She had made it into the top 30 models on "America’s Next Top Model" and was expecting to make it into the house for the summer season. A total of 13 girls were chosen.

“The producers and everyone kept telling me what a great job I was doing and really encouraged me,” Cramer says. “And then I found out I was number 14. I was the runner-up. I was not making it into the house or on the show.”

Dumbfounded, emotion overcame Cramer, and reality set in. She had withdrawn from Kent State to fly to Los Angeles to pursue a modeling career. Cramer’s life plan had changed in the blink of an eye. A little less bright-eyed, she went back to Pennsylvania to mend a broken spirit.

“I had to get a job waitressing and just wait for another semester to start so I could enroll,” she says.

Cramer’s trip to Los Angeles was not a total lost cause. She met several stylists, producers and agents and made a name for herself among the head honchos. Cramer was surprised to see her television debut was bigger than she thought it would be.

“People have stopped me on campus and said, ‘Hey, you’re that girl on America’s Next Top Model!’” Cramer says. “It’s exciting! It’s weird, but it’s cool!”

Cramer appeared in the first episode of the season, and even with the little amount of air-time she had, she still fell victim to cyber bullying.

“Some people looked up my photos and commented really, really mean things,” she says. “Like that I was too fat or too this, too that. I felt awful for a little bit until I realized I like my body. Who are these people, and why would I ever care what they say? They don’t matter.”

Now, Cramer is back at Kent State. Though she is unsure if she will try out for "America’s Next Top Model" again, she is still modeling for local agencies, and her spirit is back. Cramer is determined to follow her dreams wherever they take her.