Kent State University public relations graduate student Le Color Kang drives a replica with the peculiar red, white and blue stripes, and distinctive number 53 that looks like it was driven right off the movie set 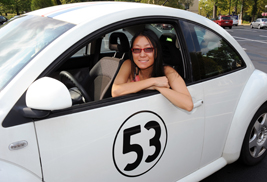 Remember Walt Disney’s Herbie, the unique, fictional Volkswagen Beetle with a mind of its own? Kent State University public relations graduate student Le Color Kang drives a replica with the peculiar red, white and blue stripes, and distinctive number 53 that looks like it was driven right off the movie set.

Kang, who is from Taiyuan City in China, had never heard about the Herbiemovie series before she came to the U.S. in 2010 for graduate study. She needed a car to get around and consulted the classifieds website Craigslist where she found a 1999 Volkswagen Beetle that had the Herbie design for sale.

“I got my car in February 2011, but back then I didn’t know about Herbie because I never watched any of the movies,” Kang says. “When the former owner of the car asked me whether I was a Herbie fan, I didn’t know what he was talking about.”

Kang has since brushed up on her knowledge. She not only bought the car, she also got a copy of the Herbie The Love Bug movie.

“I like the characters that Herbie stands for: fearless, enthusiastic, full of adventure and never giving up. As an international student who came all the way from China, I share the same feeling many times when I try to overcome difficulties. I take my Herbie to different places and I enjoy his company. He is my pal,” she says with a smile on her face.

Kang often gets stares and shoutouts from strangers because of her car.

“I hear people on the roadside shouting 'Herbie!' People talk to me in the parking lot about my car, and I normally try to be nice and say hi back to them. Sometimes it happens when I’m driving, and I cannot pay too much attention. My friends normally just honk at me and may later text me to say they saw me driving.”

Now that she has a better understanding of what the excitement is over her unique car, she appreciates the attention and loves her car even more. And just like Disney’s Herbie, Kang’s car has personality, too.