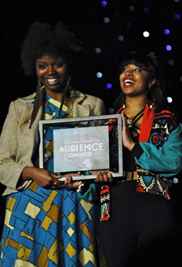 The Rock the Runway fashion show is organized by the Kent Student Center Programming office. This year’s show was themed “Celestial Space Odyssey” and featured the works of 35 student designers from different majors. Although the fashion show is open to students in any major and class standing, fashion majors are encouraged to participate to help them get a strong footing in their future careers.

The more than 1,000-member audience at the event was given the chance to text vote their favorite designs. Lowry and Tillman’s “Futuristic Perceptions” clothing line received the most votes.

“Shannon and I did a lot of research and came up with a color scheme of whites and silvers, while also using cones, bling, broken glass and safety goggles, which were incorporated into the collection,” says Tillman.

Tween Brands is a $1+ billion retailer with more than 900 stores in North America through the brand Justice. Justice offered the students an opportunity to shadow the design team and be exposed to the process of development.

“The product value of the fashion show was professionally executed, I was very impressed.  The use of film as a vehicle to introduce the MC was reminiscent of the Oscars,” says Murillo. “Shannon and Kiara’s interpretation of the theme was very creative, and their designs appealed to the audience. Their approach to design was theatrical, and I appreciated their attention to detail. I thought they did a nice job."

Both students shadowed professional designers and artists for one week at Tween Brands in Columbus, Ohio. They both agree that their experience at the company will help them build their careers in the fashion industry.

“We were split into two different departments based on our résumés,” Tillman says. “I was put in the tech design department, which is where I had the most fun because it’s related to my major. I networked with a lot of great people who seemed to be interested in helping me in my future pursuits.”

Lowry worked with and watched designers at work during her time at Tween Brands. She describes her one week there as a once-in-a-lifetime opportunity.

“I worked in the design department, which gave me a chance to draw and design for the upcoming season,” Lowry says. “I also experienced a meeting with the president of Tween Brands and the head stylist, which gave me a large boost of confidence because that is what I eventually want to do.”

“It is an excellent opportunity for any student to come to Tween Brands and work intimately with our design team and understand the decisions that have to be made in retail and fashion,” Murillo says.

“It’s important for Kent Student Center Programming to put together this event every year because it gives so many students the opportunity for real-world, hands-on experiences,” says Gunnoe.

During the fashion show, students from other majors are able to work with the contestants and on technical aspects of the show as well.

“We’ve given students from different majors the chance to work on the show,” Gunnoe says. “Broadcast majors from TV2 are involved with filming the show live; we’ve had art students create the stage backdrops; students have served as musicians for the show; and photography students get to shoot the event.”

To learn more about the Rock the Runway fashion show, visit www.kent.edu/kscprogramming/rock-the-runway-2012.cfm.

For more information about the Center for Student Involvement, visit www.kent.edu/csi/.