The Kent State TeleProductions team received high praise when its football entrance video was selected as one of three of ESPN’s favorites. 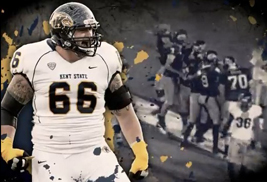 The Kent State TeleProductions team received high praise when its football entrance video was selected as one of three of ESPN’s favorites. A football entrance video is played just before a team enters a stadium to help rev-up the fans for the game to follow. ESPN also liked videos from two other larger schools: West Virginia and Florida State.

The video was a collaboration between TeleProductions Graphic Designer Jim Hurguy and graphic assistants Brian Recktenwald and Alex Kurr. The team began working on the video this past summer when Recktenwald came up with the idea.  For more than two months, they worked tirelessly trying to make a video that would exceed even the wildest expectations.

To create a video of this quality, attention was paid to every detail. Hurguy and Recktenwald went to Dix Stadium multiple times to collect images. They took panoramic pictures of the stadium on the 50-yard line and in the tunnel. They recreated all the images in 3-D in Photoshop and then used After Effects for compositing and animating. Back in the studio, Kurr spent four long days working with Photoshop to cut out individual players’ pictures. He used these cutouts to layer the video so that the Kent State players stuck out against opposing teams.

The team addressed every minuscule detail to perfect the video, and after months of hard work, Recktenwald’s idea transformed into an exhilarating video. “That’s my favorite part,” he says, “going from the idea to the finished product.”

TeleProductions has earned countless awards over the years. Just last year, Recktenwald won a Silver Telly Award and a Gold Communicator Award for his entrance videos of the volleyball and gymnastics teams. Being able to add ESPN to that list “is pretty awesome,” Recktenwald says.

The video has been viewed thousands of times.

Hurguy was thrilled with the video's success saying, “It felt good to know we were in such good company. WVU and FSU are big schools with big football programs and bigger budgets.”

TeleProductions not only creates the football team’s entrance videos, it also produces scoreboard graphics and videos for games in Dix Stadium and the Memorial Athletic and Convocation Center.

So what does the production team think about its job at the end of the day?

“The experience was extremely valuable,” Recktenwald says. “I was able to deliver material to a real client (Kent State Athletics). I gained experience in After Effects, and the video was very fun to work on. Motion graphics, specifically sports related, is what I want to do after graduation, so having the ability to work on something in the field I want to enter is a fantastic experience that I am very happy to have been a part of."

Recktenwald is a managerial marketing major with a minor in visual communication design who expects to graduate in May 2013.