The university has officially closed the Centennial Campaign and reports it raised a record-breaking $265 million, surpassing its goal by $15 million. 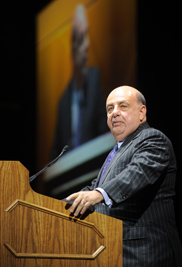 With the launch of the Centennial Campaign, Kent State University took on an aggressive agenda to raise $250 million to fund the university’s endowment, capital projects and operating needs, with a particular emphasis on student scholarships. The university has officially closed the Centennial Campaign and reports it raised a record-breaking $265 million, surpassing its goal by $15 million.

An increased endowment provides a long-term, stable funding source for university priorities, from scholarships to research to faculty support. Capital projects are ongoing, and have expanded facilities, allowing students to learn in modern classrooms and labs and giving them access to state-of-the-art technology. Also, current-operating funds allow the university to address immediate and emerging needs – providing the opportunity to quickly put resources toward the ever-changing educational landscape.

One of the single largest obstacles to student success is the financial aspect of their education, and the best tools to combat financial challenges are scholarships, which were a key focus of the Centennial Campaign. Since the start of the campaign, donors committed to supporting nearly 290 endowed scholarship funds.

Ron Pizzuti, ’62, who is a leading force behind the redevelopment of downtown Kent, Ohio, headed up the Centennial Campaign effort. He is also a Kent State alumnus and a scholarship donor. “As a graduate of Kent State, I was pleased and proud to help lead this instrumental fundraising effort,” Pizzuti says. “I’m also looking forward to continuing the legacy it has established so that future generations of students will benefit as well.”

With the end of this enormously successful effort, Kent State will be beginning the next phase of a significant fundraising plan, in which private philanthropy will be the key to ongoing growth.

“Surpassing our goal for the Centennial Campaign was the result of a university- and communitywide commitment,” says Gene Finn, Kent State’s vice president for institutional advancement. “Now we’re looking forward – with the goal of continuing the momentum we’ve achieved – to strengthen our fundraising potential and bring it to a new level to meet future needs.”

The Centennial Campaign generated gifts such as:

“The Centennial Campaign was just the beginning in terms of meeting our forward-looking agenda for the university,” adds Kent State President Lester A. Lefton. “We simply could not have come this far without the support of our donor partners. To all those who contributed to the enormous success of the Centennial Campaign, thank you. We will work to ensure that Kent State University continues to be worthy of your support and investments and that our students are achieving excellence and making an impact on our future.”