Kent State University earned a Gold SABRE Award for its “Experience for Life” television campaign at the Americas 2013 SABRE Awards that took place on May 7 in New York City. 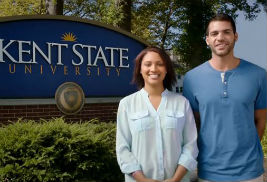 Kent State University earned a Gold SABRE Award for its “Experience for Life” television campaign at the Americas 2013 SABRE Awards that took place on May 7 in New York City. The SABRE Awards is the world’s largest and most highly regarded public relations awards competition that recognizes superior achievement in branding and reputation. More than 800 public relations and marketing industry leaders attended the awards gala.

Kent State won the award for excellence in the Corporate Reputation/Institutional Image category, edging out four other nominees — Time Warner, Harvard Business School, the Bayer Group and Kongsberg. The university shares the award with its agency of record Fahlgren Mortine in Columbus, Ohio, that helped to produce the “Experience for Life” television commercials.

“We created a campaign that speaks primarily to academically motivated college-bound students and their families, and tells the story of how Kent State equips our students for a lifetime of success and the challenges of a dynamic workforce,” says Iris Harvey, Kent State’s vice president for university relations. “This award is for every one of our students, alumni, faculty and staff who has helped to share the story of our university, and who continue to exemplify and give true meaning to our ‘Experience for Life’ campaign.”

Kent State’s latest “Experience for Life” television campaign includes four 30-second commercials, and highlights Kent State students in a variety of situations – participating in the classroom, getting advice from faculty, being mentored by successful alumni and competing for academic recognition. To further engage college-bound students, parents and alumni, the campaign includes an online component with digital content to complement the television commercials, and opportunities for Kent State alumni to share their stories about how the university gave them experience for life.

Kent State alumnus and NFL player Josh Cribbs, who graduated in the spring of 2010, is featured in one of the commercials. Cribbs, a two-time Pro Bowler and career leader with eight kickoff return touchdowns with the Cleveland Browns, returned to Kent State to complete his degree after joining the NFL. The commercials also feature a musical score created for Kent State by Mark Mothersbaugh, a Kent State alumnus who founded the new wave band Devo with fellow Kent State students in the 1970s and has become a successful composer.