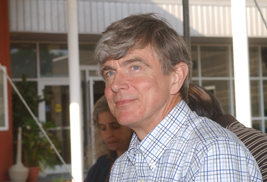 Kent State University has named Oct. 2, 2013, Lee Irving Day at the university. That day also marks WKSU’s 63rd anniversary. The station began broadcasting in 1950 from a single ring antenna mounted on a 50-foot pole attached to a chimney on the roof of Kent Hall. Irving, who died earlier this year, was a longtime supporter of WKSU and past chair of the station’s Community Advisory Council (which he joined in 1996). Irving retired in 2006 from KeyCorp, where he served in several capacities, including 10 years as treasurer and 12 years as chief accounting officer.

WKSU called on Irving to use his management skills to assist in refining the structure of the volunteer Community Advisory Council in securing gifts during WKSU’s Endowment Fund Campaign, and again when he co-chaired the station’s Sound of the Future capital campaign with former Kent State President Carol Cartwright. He and his wife, Linda, were true friends to staff and vital cheerleaders for the station and public radio as WKSU expanded its signal to reach listeners in 22 counties in Northeast Ohio, growing to have the largest radio broadcast area in the state. Although Irving is and will continue to be missed, his legacy with WKSU will remain for decades to come.