One Student’s Battle Against Apathy

While it is clear that senior criminology and justice studies major Korina Jensen is eloquent, it is the fact that she practices what she preaches that led to her being named recipient of the Campaign for Change Scholarship, a student-supported fund 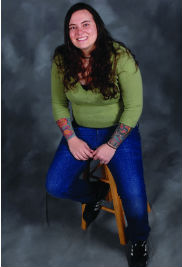 “Philanthropy is about education and thoughtful action. It’s the refusal to give in to apathy and never forgetting the value of a single life. To change the world, one person at a time, is an honor and responsibility I pursue every day – because philanthropy is a way of life.” –Korina Jensen, Kent State senior criminologist and justice studies major

While it is clear that senior criminology and justice studies major Korina Jensen is eloquent, it is the fact that she practices what she preaches that led to her being named the 2013 recipient of the Campaign for Change Scholarship, a student-supported philanthropic fund that rewards deserving students. Jensen, a native of California, was raised by her mother and grandmother in a culture of giving. This environment allowed her, during her teenage years, to participate in more philanthropic activities than many people will do in a lifetime.

“I was a buddy to Special Olympians and worked with Alzheimer’s patients,” says Jensen. “Later on, I worked with homeless youths, drug-addicted individuals and at-risk kids at a drop-in center — a safe place for runaways or victims of sexual assault to go for food, medical resources and HIV and pregnancy testing.”

In addition, Jensen is a tireless defender of animal rights. She has fostered five older dogs and three cats, and she advocates against animal testing, circuses, vivisection, euthanasia and breed discrimination.

At 15, Jensen came out to her family and friends.

“It took a long time for people to see me as anything other than gay, instead of just as a person,” Jensen says. “I got involved with the Gay and Lesbian Association, working with GLBTA (Gay, Lesbian, Bisexual, Transgender and Ally) kids. I talked at various high schools about the importance of having a safe place, of being aware of the things you say. In addition, I worked with people with eating disorders, and victims of domestic violence and trauma. That was the turning point for me. I decided it was something I wanted to get involved with permanently,” she says.

Jensen decided to go back to college at age 25. She will complete her degree in criminology and justice studies in May 2014. She hopes to one day work with the FBI on their child abduction resource team, recovering abducted children, and in their anti-pornography and sex trade divisions.

“Paying my own way through college hasn’t been easy, but so many generous people have helped me along the way. I’m grateful for receiving the Campaign for Change Scholarship so that I can continue pursuing my dream of becoming a criminologist and assisting young victims of abuse and neglect. I want to pay it forward, to be the voice for everyone who doesn’t have one. We have to be there for others, and fight the common enemy of apathy,” she says.

Kent State’s donors — including generous faculty and staff — demonstrate daily that they are anything but apathetic. They believe in the dreams of passionate, talented and deserving students like Jensen, and they support them through gifts of time, talent and financial resources. Please consider making a gift to support the Criminology and Justice Studies program, the Campaign for Change Scholarship, or one of literally thousands of other giving options that can help Jensen and many students like her overcome the financial roadblocks that may stand in the path of their dreams.

Click here to learn more about how you can put your money where your heart is on behalf of deserving students.