Panelists have been announced for a live presentation of NPR’s Peabody Award-winning Wait Wait... Don’t Tell Me! on Thursday, June 28, at 7:30 p.m. in the State Theatre at Cleveland’s PlayhouseSquare 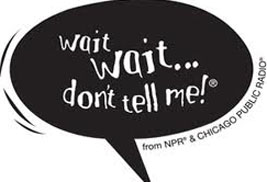 Panelists have been announced for a live presentation of NPR’s Peabody Award-winning Wait Wait... Don’t Tell Me! on Thursday, June 28, at 7:30 p.m. in the State Theatre at Cleveland’s PlayhouseSquare.

The popular, fast-paced news quiz challenges panelists and listeners with a series of games based on current events. Host Peter Sagal and official judge and scorekeeper Carl Kasell, will be joined on stage by Alonzo Bodden, Kyrie O’Connor and Mo Rocca. Along with competing for points, the panel’s role is to assist in making light of the week’s news. Favorite segments include, Who’s Carl This Time?, The Limerick Challenge, Not My Job, and the final panelist lightening round.

The live show in Cleveland is co-hosted by 89.7 WKSU and 90.3 WCPN ideastream. The event will be taped and edited for broadcast on NPR stations nationwide the weekend of June 30 and July 1. WKSU airs the program Saturdays at 11 a.m., and it is heard on 90.3 WCPN at 2 p.m. on Sundays.

Now in its 14th season, Wait Wait… Don’t Tell Me! uses headline stories from across the country and around the world as the fodder for questions for an hour of laughter. At home listeners compete as well – anxious to earn the coveted prize of Kasell’s voice on their home answering machine or voicemail. Special treats and games keep the theatre audience laughing as well.

Wait Wait… Don’t Tell Me! is a co-production of NPR and WBEZ-Chicago. With a weekly national audience of 3.2 million people, the show ranks second to only Car Talk on a list of NPR’s most highly rated weekend programming. This is the second time Wait Wait… Don’t Tell Me! will be live in Northeast Ohio. WKSU presented the program at the Akron Civic Theatre in 2003.

ideastream is a public service, multiple-media organization with a mission to strengthen our communities by providing distinctive, thought-provoking programs and services that enlighten, inspire, educate and entertain.

Panelist Bios:
Alonzo Bodden is an international headliner, having performed comedy shows for audiences worldwide. Since winning season three ofLast Comic Standing, Bodden has quickly made a name for himself. He hosted numerous shows on the Speed and Travel Channels - including 101 Cars You Must Drive and America’s Worst Drivers - and produced a one-hour comedy special for Showtime, Who’s Paying Attention? He can also be seen as a host of the new ITV show Inside the Vault. He is single, likes jazz and, of course, long walks on the beach (as long as that doesn’t mean getting in the water). Find a link to his Who’s Paying Attention? podcast at alonzolive.com.

Kyrie O’Connor is deputy managing editor/features at the Houston Chronicle and writer of the daily blog MeMo on the Houston Chronicle website. Before becoming a Texan by choice in 2003, she was assistant managing editor/features at The Hartford Courant in Connecticut. Her articles and book reviews have appeared in newspapers nationwide, and in Commonweal magazine. She devotes her time to tending an epileptic 120-lb. chocolate Lab, supporting a bad soy latte jones and downloading transgressive ringtones onto her celly. She is aesthetically, but not morally opposed to the inside-out Reese‘s peanut butter cup.

Mo Rocca is a correspondent for CBS Sunday Morning with Charles Osgood and the host of The Tomorrow Show with Mo Rocca on CBSNews.com. He has appeared on almost every cable network, including Telemundo, where he wowed audiences in a small, but pivotal role in the hit telenovela Amor Descarado. He appeared on Broadway in the 25th Annual Putnam County Spelling Bee. His book, All The Presidents’ Pets, blows the lid off the White House’s deepest, darkest secrets.