Porthouse Theatre, Kent State University's outdoor summer theater on the grounds of Blossom Music Center, will close its 2013 season with "Fiddler on the Roof," running July 25 through Aug. 11.

"Fiddler on the Roof" has touched audiences around the world with its humor, warmth and honesty. The universal theme of tradition cuts across barriers of race, class, nationality and religion. 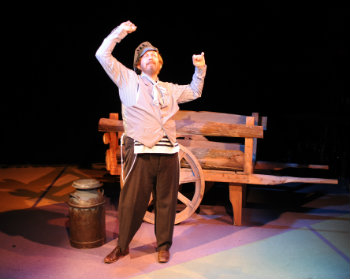 "This life-affirming musical will illuminate the powers of tradition, both in the theatrical sense of the rituals which draw us to musical theatre and the powers of communal values to support our tough decisions in life," van Baars said.

Van Baars explained this production of "Fiddler on the Roof" will respect the tradition of the show while also including some new creative interpretations.

"There is such value placed on the traditions of mounting a production of 'Fiddler on the Roof,' from the use of the iconic Jerome Robbins choreography to the religious observations of the Hebrew faith," van Baars said. "Just as Tevye is tested to accept change, our production will play with some of the traditional elements, promising to be not-your-Bubbe's 'Fiddler.'"

"Fiddler on the Roof" features five members of the Actor's Equity Association* among a cast of 32 actors.

The show's celebrated score by Jerry Bock and Sheldon Harnick features songs loved the world over: "Sunrise, Sunset," "If I Were A Rich Man" and "Matchmaker," among many others.

In Porthouse tradition, the Green Show will be performed on the lawn before each production of "Fiddler." The Green Show cast is made up of student members of the Porthouse Theatre Academy, consisting of soon-to-be college students entering the Kent State musical theatre program.

Porthouse Theatre features free parking and allows patrons to bring in picnics (including alcohol) to its grounds to enjoy the beautiful surroundings of the Cuyahoga Valley National Park, which is located next to the theatre grounds. A covered picnic pavilion is available for reservation at $2 per person or free for subscribers and is based on availability. There also is a concession stand of light snacks and beverages. Many picnic tables are available for everyone's enjoyment at no cost.