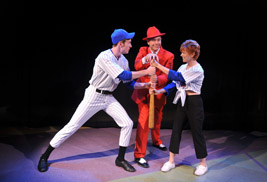 “Damn Yankees” is the perfect musical comedy that both theatre and sports enthusiasts will love. The story centers around real estate agent Joe Boyd, who, one night, is up late grumbling that if his favorite team, the Washington Senators, just had a “long-ball hitter” they could beat the “damn Yankees.” Enter sleek car salesman Applegate, who is really the devil ready to wheel and deal with Joe Boyd’s soul. With some pursuasion, Applegate wins and Joe Boyd becomes the newly discovered baseball prodigy Joe Hardy. Suddenly, fans have the slugger they need to win the pennant, and baseball season is starting to look up.

Winner of seven Tony Awards including Best Musical, “Damn Yankees” is set in Washington, D.C., during the 1950s – a time when the New York Yankees dominated baseball. With words and music by Richard Adler and Jerry Ross, and a book by George Abbott and Douglass Wallop, “Damn Yankees” features songs such as “Heart,” “Whatever Lola Wants” and “Shoeless Joe From Hannibal Mo.”

“This show is like an Indians game I remember in the late ’90s with Jose Mesa on the mound with a full count, two outs and bases loaded – audiences won’t know what hit ‘em,” says Terri Kent, director. “I am so thrilled to be directing ‘Damn Yankees’ because it is just such a fun show.”

“Damn Yankees” is directed by Kent, the theatre’s well-known artistic director, whose work at Porthouse includes “Chicago,” “Bye Bye Birdie,” “The Music Man,” “Dames at Sea,” “Annie Get Your Gun” and  “Oklahoma!,” just to name a few. Most recently, Kent directed “A Chorus Line” at Kent State University and “Quilters” at Weathervane Theatre in Akron. Last year at Porthouse, audiences were treated to Kent returning to the stage as Dolly Levi in the ever-popular “Hello, Dolly!” Kent, who is a full professor, also serves as the coordinator of the musical theatre program for the School of Theatre and Dance at Kent State.

Kent teams up with Music Director Jonathan Swoboda, who often serves as a featured keyboard artist for Mannheim Steamroller. Swoboda has served as music director for more than 75 theatres and touring companies. He also served as resident music director at the Pacific Conservatory of the Performing Arts in California. He is currently on faculty at Kent State’s School of Theatre and Dance.

Choreography for “Damn Yankees” is by John R. Crawford, who has been involved with Porthouse since 1993. “My choreography for this show, while original, is inspired by both the original Fosse choreography and the 1994 revival’s choreography by Rob Marshall,” Crawford says. Other Porthouse shows he has choreographed include “The Music Man,” “Annie Get Your Gun,” “Oklahoma!” and “Hello, Dolly!” He has choreographed professionally for Porthouse Theatre, the Northeast Ohio Dance Ensemble and Dance & Company in Virginia. Crawford performed professionally as a dancer and actor with the Richmond Ballet, VCU Dance Company, Kings Productions, Busch Entertainment Corporation, Ann Vachon/Dance Conduit, Porthouse Theatre and the Leaven Dance Company. Crawford serves as the dean of Kent State’s College of the Arts, which encompasses the schools of Art, Music, Fashion, Theatre and Dance and the Kent State University Museum.

The production team is rounded out with scenic design by local designer Ben Needham. Lighting Designers Cynthia Stillings, who serves as the producing director of Porthouse, and Jakyung Seo, faculty member at Kent State, will co-design. Sound design is byBrian Chismar, a recent Kent State graduate of the School of Theatre and Dance theatre technology program. Costume design is by Janine Evans, who joins Porthouse Theatre from Milliken University in Illinois.

The cast includes five actors belonging to the Actors’ Equity Association* as well as 18 actors as part of the ensemble and cast.

MaryAnn Black* of Copley stars as the seductress Lola. Black is a familiar talent at Porthouse, having starred in such shows as “Chicago,” “Dames at Sea,” “The Music Man,” “Sweet Charity,” “Guys and Dolls” and “Oklahoma!” She toured with the Broadway touring company of “A Chorus Line.” Her television credits include regular appearances on “Three’s Company,” her own ABC sitcom “Sugartime” and several Jane Fonda workout videos.

Marc Moritz*of Cleveland Heights as Joe Boyd. Moritz originated the role of Talk Show Host in the Broadway production of the Stephen Sondheim/Hal Prince musical, “Merrily We Roll Along.” He is the founder of Giant Portions Improv Company and has performed and taught at Second City. He most recently appeared as Al Lewis in “The Sunshine Boys” at Porthouse Theatre.

Mary Anne Prevost* of Cuyahoga Falls as Meg Boyd. Prevost last performed at Porthouse in 1980 in the role of Kid in “The Roar of the Greasepaint.” She has performed Off-Broadway with the New York Gilbert and Sullivan Players, with Joe Namath in “Bells Are Ringing” and as a back-up singer with country legend Eddy Arnold. TV and film credits include “Duplicity,” “Law and Order: Criminal Intent” and the Season 2 promo for “True Blood.”

Rohn Thomas* of Kent as Coach Benny Van Buren. Thomas was most recently seen as Merchant in the Great Lakes production of “The Taming of the Shrew.” He also appeared in “The Ides of March” with George Clooney and Ryan Gosling. Other film and television credits include “The Shawshank Redemption,” “Welcome to Collinwood,” “The Mothman Prophecies,” “The West Wing,” “Sudden Death,” “Telling Lies in America” and many others.

Eric van Baars* of Cuyahoga Falls as the devilish Applegate. Van Baars is well-known to Porthouse audiences having starred as “The Music Man,” Felix in “The Odd Couple,” Herod in “Jesus Christ Superstar,” Will Parker in “Oklahoma!” and so many more. Van Baars also has appeared at Radio City Music Hall, Great Lakes Theater Festival, Walnut Street Theatre, St. Louis Repertory Playhouse and Beck Center for the Arts.

Porthouse Theatre features free parking and allows patrons to bring in picnics (including alcohol) to its grounds to enjoy the beautiful surroundings of the Cuyahoga Valley National Park, for which the theatre grounds abut. A covered picnic pavilion is available for reservation at $2 per person or free for subscribers and is based on availability. There is also a concession stand of light snacks and beverages. Many picnic tables are available for everyone’s enjoyment at no cost.

Porthouse Theatre is located on the grounds of Blossom Music Center at 1145 W. Steels Corners Road. Tickets are available by calling 330-672-2497 or 330-672-3884, Monday through Friday, from 11:30 a.m. to 5 p.m., or by visiting www.porthousetheatre.com to purchase online. Subscriptions are currently on sale and range for adults from $63 to $90 and for seniors from $54 to $90 for the three-show package. Student pricing is available as well, and group tickets are available for groups of 20 or more.

Single tickets range from $25 to $33 for adults and seniors, and $17 to $20 for students. The box office is located on the Kent State campus in the Music and Speech Center on the corner of East Main Street and Horning Drive in Kent.

The box office accepts personal checks, Visa, MasterCard and Discover. Special rates for groups of 20 or more are available, as are student rates. Call 330-672-3884 or visit www.porthousetheatre.com for details.

The rest of the Porthouse season includes “The World Goes ‘Round,” a cabaret of Kander and Ebb songs from such shows as “Chicago,” “Cabaret” and “Kiss of the Spider Woman” and runs July 5-21.

The season closes with the beloved musical “The Sound of Music” by Rodgers and Hammerstein, running July 26-Aug. 12.