Kent State University Associate Professor William Kist, Ph.D., has always been an avid reader, so when he was presented with the opportunity to write book reviews for the Plain Dealer, he jumped at the opportunity. 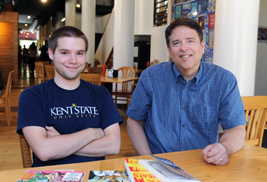 Kent State University Associate Professor William Kist, Ph.D., has always been an avid reader, so when he was presented with the opportunity to write book reviews for the Plain Dealer, he jumped at the opportunity. One of Kist’s recent book reviews is on Not the Israel My Parents Promised Me, the last book written by late Cleveland author and long-time WKSU commentator Harvey Pekar.

“Reviewing books keeps me current with what is being published and it helps me practice my writing skills,” says Kist who is a former high school English teacher. “Plus, since we in the education field have so much interaction with the public, I think it's important for us to write for publications that will be read by the general public whenever we have the opportunity.”

Kist, who works in Kent State’s School of Teaching, Learning and Curriculum Studies, put on his creative hat for his review of Pekar’s last book. Often autobiographical, Pekar’s work would include a script from his comic books with the author himself appearing as a character in the story. He also frequently collaborated with artist R. Crumb to do the artwork. Adopting Pekar’s style, Kist chose to present his review as a comic strip, and like Pekar, appear as a character in it.

“When I was assigned to review his latest work, I thought it would be a great idea to write my review in the style of a Harvey Pekar/R. Crumb graphic novel, and so that's why I appear as a character in the comic. I was pleased that Plain Dealer book editor, Karen Long, gave me permission to do such an unconventional review,” Kist says. “Harvey Pekar was one of the great American writers in the genre of graphic novels, which Harvey preferred to call comic books. Many people are familiar with the film, American Splendor, that was based on his life and work.”

Collaborating With a Student Artist

To create the comic strip review, Kist collaborated with Kent State integrated language art senior Alex Ward and his brother Nathan, who both have an interest in and work on graphic novels.

“Our collaboration was amazingly smooth,” Kist says. “Alex was very familiar with Pekar's work and he and his brother were able to perfectly emulate the Pekar/Crumb style. I got the script to them in a few days and after a few weeks, the finished strip was done.”

Ward and his brother have always enjoyed reading comics and have been creating their own comics for a long time.

“For the Pekar review, I drew the pencils and layouts, and Nathan threw on those heavy inks and intense stippling to give it that Crumb-ish loom,” Ward says. “Dr. Kist always pushes in class that a wide range of genres can make the classroom much more engaging, so I wasn't surprised when I heard he wanted to try something with comics. However, I was thrilled that he wanted to work with me and Nathan. We knew this type of thing doesn't happen often in the Plain Dealer, so it was a really cool, unique opportunity, and the fact that the Plain Dealer went for it was even cooler!”

Although Kist does not believe that the book, Not the Israel My Parents Promised Me, is Harvey's strongest work, he thinks there are many Pekar fans out there, particularly in the Cleveland area, who want every last remnant of what Harvey left behind.

Click here to see Kist and the Ward brothers’ comic strip review of Pekar’s book that appeared in the July 22 issue of the Plain Dealer.