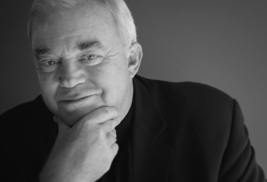 Jim Wallis, CEO of Sojourners, a national nonpartisan Christian organization, will discuss “The Politically Engaged Believer: Morals, Ethics and Social Justice in the 2012 Election” at Kent State University on Thursday, Sept. 13, at 7 p.m. in the Kent Student Center Kiva. The event is free and open to the public. A book signing will follow his talk.

A bestselling author, public theologian, speaker and international commentator on ethics and public life, Wallis recently served on the President’s Advisory Council on Faith-based and Neighborhood Partnerships, and currently serves as the chair of the Global Agenda Council on Faith for the World Economic Forum. He teaches a course on “Faith, Social Justice and Public Life” at Georgetown University and has also taught at Harvard University.

Wallis’ latest book is Rediscovering Values: On Wall Street, Main Street and Your Street — A Moral Compass for the New Economy. His two previous books, The Great Awakening: Reviving Faith & Politics in a Post–Religious Right America and God’s Politics: Why the Right Gets It Wrong and the Left Doesn’t Get It, were both New York Times bestsellers.

Wallis frequently speaks in the United States and abroad. His columns appear in The New York Times, The Washington Post, Los Angeles Times and The Boston Globe, among other major news venues. He frequently appears on radio and television, on CNN, MSNBC and Fox News, on shows such as Meet the Press, Hardball, The Daily Show with Jon Stewart, The O’Reilly Factor, and National Public Radio.

Co-sponsors of this year’s symposium include Kent State’s Honors College, University Libraries, College of Arts and Sciences, Department of Political Science, Department of Philosophy, Religious Studies program and Center for Student Involvement, as well as the Church of the Saviour United Methodist, Cleveland Hts.
Sojourners is a national Christian organization committed to faith in action for social justice. With a 40-year history, Sojourners is a nonpartisan leader that convenes, builds alliances among and mobilizes people of faith, focusing on racial and social justice, life and peace and environmental stewardship. For more information on Sojourners and Wallis, visit www.sojo.net.